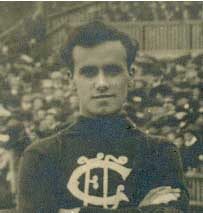 A talented, yet volatile rover-forward who transferred from Melbourne to play in two successive losing Grand Final teams in a short career at Carlton, John Alfred (Jack) Baquie (sometimes spelt with a 'c') was one of the last players from a rival club to be recruited by Jack Worrall before the triple Premiership coach was sacked by the Blues in 1909.

Baquie had spent two seasons with the Redlegs, where he earned a reputation as a fierce competitor and a creative user of the ball. At Carlton, he bolstered an already strong roving contingent, and later made headlines as a central figure in a controversial aftermath to the 1910 VFL final series.

When Baquie bade farewell to the MCG, he walked straight into the turmoil surrounding the future of Worrall - the man who had convinced him that there were more opportunities and rewards to be had at Princes Park. Ironically, Worrall had vacated the coaches box by mid-season, to be succeeded by ‘Pompey’ Elliott as captain-coach. Yet somehow, despite all the distraction, the Blues still wound up second on the ladder, with a real chance of taking out their fourth VFL Premiership in a row.

Baquie played finals football for the first time in his debut year, and was a good contributor in Carlton’s emphatic Semi Final win over Essendon. Elliott played all three of his gun rovers; Viv Valentine, Richard Moran and Baquie in that match, and they combined well – as they did a week later, when Carlton beat South Melbourne by 22 points in the Preliminary Final.

Had Carlton finished on top of the ladder, that win over South would have secured the 1909 Premiership. But we didn’t – and under VFL rules of the day, the Bloods were entitled to challenge Carlton to a Grand Final showdown for the flag - which of course, they did. And this time, they used pace and slick teamwork to upset the bigger and stronger Blues by two points in a spectacular and hard-fought match.

After that heart-break, ‘Pompey’ Elliott set his men for revenge in 1910, and all was going to plan when Carlton finished the regular season as minor premiers. Baquie continued playing consistent football throughout the year, particularly in tandem with Viv Valentine. His sixteen games produced eleven goals, which did no harm at all to Jack’s growing reputation.

By circumstance, Carlton’s opponent in the 1910 Semi Final was again South Melbourne, whom the Blues had gleefully beaten twice during the year. Thousands of confident Carlton supporters packed into the MCG for the game, only to be stunned by the news that only an hour or so before the bounce, three players had been pulled out of the team for allegedly accepting bribes to play ‘dead.’ Thus, totally disrupted, the Blues fell to the Southerners again by 12 points.

Collingwood then beat South Melbourne in the Preliminary Final, and Carlton quickly exercised its right to challenge the Magpies to a Grand Final showdown - a match that was have far-reaching circumstances for at least four players, including Jack Baquie.

Carlton got off to a bad start in the 1910 decider, trailing by 19 points at quarter time, and still 20 points adrift at the last change. The match had been a typically tense and physical finals clash until that fourth quarter, when it erupted into an all-in brawl that saw Bacquie and Collingwood’s Tom Baxter standing toe to toe trading punches. Almost simultaneously, and not far away, Carlton’s Percy Sheehan took on Collingwood’s Jack Shorten in another willing bout. Eventually, more than thirty players and officials were involved, before field umpire Jack Elder smartly cleared the area by bouncing the ball and calling ‘play on’. Collingwood hung on to win by 14 points, and umpire Elder immediately reported the four main culprits on a variety of charges.

In a time when football violence was a topic of hot debate, the VFL came down hard on the culprits. Baquie and Baxter were suspended for the entire 1911 season. Sheehan and Shorten fared even worse; both being handed an 18-month sentence. Shortly afterward however, controversy erupted when Collingwood had Tom Baxter’s conviction overturned on appeal. This happened when they produced a written declaration from another of their players, Richard Daykin, that it was him - not Baxter - who had traded blows with Baquie.

Although umpire Elder stated that the Collingwood player he reported had dark hair (a view supported by at least one other boundary or goal umpire) and ‘Bluey’ Daykin’s hair shone bright red - the VFL chose to accept Daykin’s confession of guilt and exonerated Baxter. As a result, Collingwood regained their star rover for their Premiership defence in 1912, while Daykin escaped any penalty at all when he promptly retired. This murky episode won the Magpies few friends, and accelerated the move toward the adoption of individual player numbers in the VFL.

While serving out his suspension, Baquie kept his fitness and skills up to scratch with country club Seymour. The Blues didn’t call on him again for almost two years, until he eventually rejoined Valentine and Moran around the packs against Geelong in the 1912 Semi Final. Wearing guernsey number 25, his return was somewhat spectacular, and his final quarter heroics helped get the Blues home by almost five goals. However, another finals campaign ended the following week, when the Blues lost a Preliminary Final thriller to Essendon by four points.

Baquie switched to guernsey number 11 in 1913, to play only six more games for Carlton before walking out on the club in unexplained circumstances in August of that year. It’s fair to say that Princes Park wasn’t the happiest of football environments at that time (the team was in the process missing the finals, and sliding down the ladder to sixth) so Baquie wasn’t the only disgruntled player to seek greener pastures.

In 1914, Baquie bobbed up back at Melbourne, where he played another two seasons before the Redlegs went into voluntary recess for the duration of the Great War. When they returned in 1919, Jack saddled up again at the age of 33. He eventually retired the following year, with a VFL career total of 91 games and 34 goals to his credit.

Baquie was recruited from Seymour, but also spent time at Melbourne and Brunswick.

Footnote: The Mornington Standard April 8, 1911 mentioned that Carlton's Bacquie may be playing (in 1911) with Moorabbin in the Federal Competition.