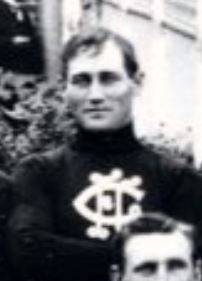 Andrew O’Donnell was a loyal clubman from Carlton Juniors who was included in the Blues’ VFL team for one senior match in 1910. Almost exactly two years later, he was recalled for another single appearance, before his career eventually got rolling in 1913.

O’Donnell was born in Carlton in 1885, and grew up playing Australian Rules with his local district club. The Juniors were a strictly amateur team, but with strong ties to the Navy Blues. In fact, the players of both clubs often trained together. O’Donnell apparently played as a central defender with the Juniors, so he was asked to take up a half-back flank role when he joined the Blues for their home match against Collingwood at Princes Park in the opening round of 1910.

Andy was listed to play alongside two of Carlton’s stars that afternoon; Billy Payne at centre half-back, and Martin Gotz on the opposite flank. However, Gotz was switched into a follower’s role before the match, and kicked two goals as the Blues lost by 28 points. After that, O’Donnell didn’t play for Carlton again until round 3, 1912, when he was brought into the team that narrowly lost to Essendon at the East Melbourne Cricket Ground.

History seemed to be repeating itself yet again in 1913. O’Donnell played in a back pocket in round one, then was left out for three games. But when he came back for the match against University at the MCG in round 5, he clicked into form, and was almost impassable across half-back in a 16-point victory by the Blues.

O’Donnell played another ten matches that season, before retiring after round 17, when Carlton’s hopes of a finals berth were dashed in a four-goal loss to Geelong at Princes Park. Three other notable Blues; Jim Marchbank, George Bruce and Jack Baquie, also finished up that afternoon.

2000 Semi Final - Silvagni tears the hammy off the bone.