In Craig Bradley's 350th game, Carlton defeated Essendon by 7 points at the MCG. 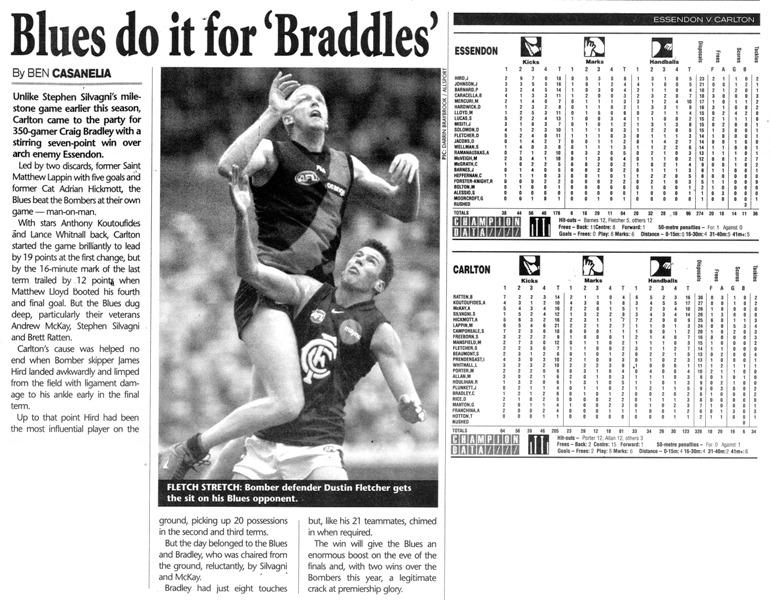 Click to expand
Fired-up to celebrate champion Craig Bradley's 350th game, the Blues recorded a hard-fought win over the reigning Premiers for the second time that year. Carlton started well, kicking 7 goals to four in the first quarter, but the Bombers struck back hard and narrowed the margin to 8 points at half time. Essendon then failed to make the most of their opportunities in the third term, kicking 2.7 to the Blues' 2.1, but still narrowing the three-quarter time margin to just 2 points. They kept coming however, and forged ahead by 12 points at the 17-minute mark of the last quarter, before Carlton staged a late revival to snatch the last three goals of the match and run out 7-point victors.

Matthew Lappin's ability to create something from nothing and find space resulted in five spectacular goals, including two over the shoulder, and a perfect soccer goal off the ground. He had 24 possessions and took 7 marks. Adrian Hickmott also played an important role up forward with 25 disposals and a goal, while midfielders Anthony Koutoufides and Brett Ratten kept their team in the contest when the pressure was on. As always, Stephen Silvagni and Andrew McKay were solid in defence.

This win was particularly sweet after Herald Sun journallist Mike Sheahan had written that Carlton had "surprised" Essendon with their round 3 win. There was no surprise this time though, and this important victory consolidated Carlton's sixth place on the ladder. It was the third time the Blues had beaten Essendon on the MCG in two years. During the same period, no other team had managed it even once.

350 Games: Craig Bradley, only the second Blue to achieve this feat
100 Goals (Carlton): Matthew Lappin
Interesting Fact: This was our 11th win for the season, on our way to 14 wins in the Home & Away Rounds. It wouldn't be until season 2009 that Carlton would again win more than 10 matches in any given year. We were, at this stage, on the edge of a cliff, but didn't know that an enormous tumble was coming....