After 11 straight wins, the Tigers snapped the sequence with an after the siren goal from Doug Strang.

Regarded as one of the best games of the season, this clash had every element of football – speed, high marking, good kicking and fierce physical work. Both teams were determination exemplified.
Carlton made four changes. Frank Gill and Mick Crisp missed this game, as both were in the VFL side which played Adelaide in South Australia. Ted Pollock had influenza and Vin Arthur was omitted. Into the team were Aub Martyn, Charlie Street, Harry Vallence back from his shoulder injury, and Fred Williams.

In ideal conditions, Carlton won the toss and kicked to the Heatley Stand end. Street repelled an early Richmond attack and soon after Cooper kicked the first score, a behind. Richmond answered immediately to register the first goal. Weight was being used freely on both sides. Colin Martyn kicked a minor score after a fine mark, but again Richmond goaled, this time from a place kick. Bullen drop kicked a goal after marking a pass from Colin Martyn, but as before Richmond replied with a goal. Richmond, playing a stronger and more robust game, were on top in most areas and they added their fourth goal, with another place kick to lead by 17 points. The wind was now playing across the ground, favouring neither side. Vallence snapped a behind over his shoulder and later goaled, after receiving a doubtful free kick, following some great work from Kelly and Shea. Mackie was playing well in defence and Kelly, Johnson and Colin Martyn were combining well together to launce several Carlton attacks. Richmond by nine points at quarter time.

Huxtable thwarted a Richmond attack to start the second term. At the other end, Richmond’s defence was well on top keeping Vallence quiet. Clarke and Opray combined well to get the ball to Williams, who evaded a pack and snapped a bouncing goal. Rough, hard fought play was shown by both sides, but Carlton was now getting on top. Kelly was playing well on the wing and Gilby was notable in defence. Davey, who had been quiet, took a fine mark and goaled to give Carlton the lead, and shortly after marked strongly right in front of goal to add another. Richmond answered with a goal straight away. A goal by Bullen from the forward pocket, after some good play, resulted in an eight point lead to Carlton at the main break. Huxtable’s long kicking from defence had been just one highlight in a great quarter.

Richmond came out firing in the third quarter. A goal from close in front, was followed by another, brought around the wing. Another was added and suddenly the Tigers had the lead. Carlton were looking rattled, but recovered well through Aub Martyn and Kelly who kicked to Vallence for Carlton’s seventh goal. Play had become very scrambling. Davey received a free kick and passed to Shea, who goaled to put the Blues in front the lead. However, a late goal gave Richmond a five point lead going into the last term.

Opening the quarter, Carlton attacked strongly. Clarke, in the forward pocket, passed to Vallence who marked and goaled. Immediately, Richmond, with a running goal, replied to take a one goal lead. C. Martyn missed with a snap, and Richmond attacked again, playing confidently. Good work in defence from Crowe could not prevent a place-kicked Richmond goal and their lead was out to 11 points. Play was tough and the game was very physical. Opray got the ball to Green, who goaled after some strong work in the pack. Shea then goaled from a free to level the scores at 11.11 each. Richmond now went forward and they goaled, but Shea goaled from in front within a minute to again tie the scores. Excitement was intense as spectators roared themselves hoarse, willing their side to win. Into time on, Green had a long shot that just missed and the Blues led by a point. Carlton was finishing stronger. Mackie and Johnson stemmed Richmond attacks and it appeared that Carlton might hang on, but one last drive by Richmond just before the ball was marked by Strang. The siren blew as he was lining up and he kicked truly to give Richmond a five point victory.

Ironically the Richmond player who kicked to Strang was none other than Percy Bentley, who later would coach the Blues to two premierships in the forties.


The Blues record was now 11-3. At the end of this round Carlton were in 1st spot on the ladder with a percentage of 128.4 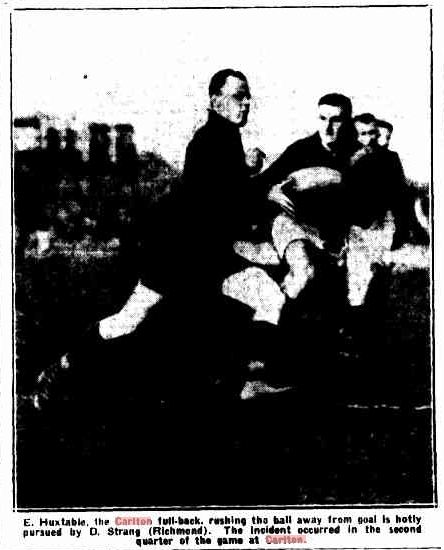