Blustery wind at Carlton resulted in a rather poor and uninteresting game of football. Footscray failed to handle the conditions, and Carlton, taking risks and with superior pace, were in control from early in the match.

Vallence goaled early in the opening quarter and Bullen and Crisp kicked minor scores shortly after to set the tone for the day. Carlton’s backline was well on top, Davey was winning in the ruck and the centreline was again dominant. Footscray’s first goal came late in the quarter, before Crisp and Vallence answered with Carlton’s next two. The swirling winds were making scoring difficult and Carlton should have been further ahead at the first change, but for kicking six behinds. The second term was much the same. The wind played havoc with the ball, resulting in a fumbling and mistake ridden game. Although Carlton was well on top, it did everything but kick goals, scoring 1-7 for the quarter to lead by 22 points at half time.

Footscray came out after the break playing much better football, but although they tried hard, Carlton was always 15 or more points in the lead. In an even term, both sides kicked two goals, with Vallence’s dribbled goal from deep in the forward pocket the highlight. Footscray continued their better form into the last quarter, but after Carlton rallied, using weight freely and fairly, Footscray faltered and over the last ten minutes Carlton were comfortably in control and went on to record a 24 point win.

At the end of this round Carlton were in 2nd spot on the ladder with a percentage of 126.0 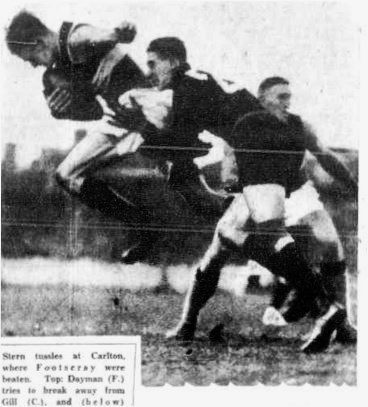