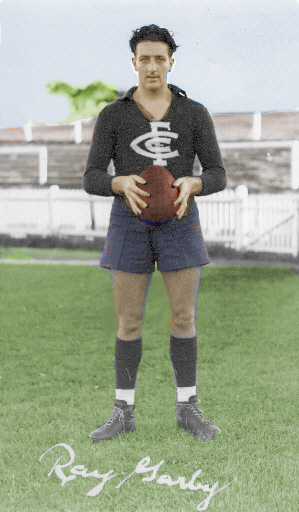 When the Second World War ended in August 1945, and Gunner Raymond Garby returned from active service, one of the first things he looked forward to was winning a place in the seniors at Carlton Football Club. At various times throughout his three years in uniform – while on leave, or stationed in Victoria – Ray had played the odd game or two with Carlton Reserves. Now that hostilities had ended, and it was time to get serious about playing VFL football again.

The Blues had first shown interest in the dashing specialist half-forward flanker from Cohuna in 1940, when, as a 17 year-old student, Garby began starring for Assumption College at Kilmore. But serious ankle and knee injuries in a pre-season practice match the following year set back his aspirations, and when he joined the many thousands of other young Australians volunteering for war service, his football career was put on hold.

Between 1942 and 1945, Ray’s service as an anti-aircraft gunner took him to four Australian states, where he looked for every opportunity to play in local competitions. In August 1945, he was kicking bags of goals for the South Sydney Rabbits in the NSW League when Japan’s surrender brought hostilities to an end at last. Quickly discharged, Garby was welcomed back to Princes Park and made his VFL senior debut for the reigning premiers in the opening round of 1946. The game was a rematch of the infamous 1945 ‘Bloodbath’ Grand Final between Carlton and South Melbourne, and had a similar result with the Blues winning by 8 points.

Garby played 15 matches and posted 21 goals in an impressive first season. Quick, with wonderful evasive skills and strong hands, his trademark was long, accurate torpedo punts on the run – whether shooting for goal or kicking to position for a team-mate. However, Carlton suffered the dreaded Premiership hangover that season, and failed to make the finals.

In 1947, with a brilliant new captain in Ern Henfry in charge, the Blues roared back to the top of the ladder, and when rover Fred Stafford goaled with an instinctive snap-shot in the dying seconds of a cliff-hanger Grand Final, the Blues won their second Premiership in three years - by one point over Essendon. Garby was dangerous all afternoon on his flank, and barrelled a glorious long goal late in the game to become only the second Blue (after Jimmy Morris in 1914) to wear guernsey number 20 in a Premiership side.

Another bout of post-flag euphoria saw the Blues slide to sixth in 1948, but Garby continued to be a positive in a disappointing year. He booted 39 goals in his 19 matches, to share the club’s goal-kicking award with defender-turned-forward Ken Baxter.

In 1949, Carlton’s topsy-turvy form endured. Second after the home and away season, the Blues leapt to flag favouritism with an emphatic victory over North Melbourne in the Second Semi-final, before Essendon spoiled the party in the Grand Final, and crushed Carlton by 11 goals. Like all of the Carlton forwards, Garby was well held by the Bomber defence, and his single major in the game took his season tally to 18 from 15 matches.

Overall, season 1950 was another time of frustration at Princes Park, as once more, the team plummeted from the top rungs of the ladder to eighth. And a series of narrow losses late in the year just added to the annoyance. Despite all this, Garby’s effort in kicking 34 goals in his 17 matches was a bright spot in a forgettable year – until he announced that he was giving VFL football away to return home to Cohuna as captain-coach.

At just 27, Ray had plenty of football left in him, but he felt that he had achieved more than he had ever hoped for in his five seasons in navy blue. Two Grand Final appearances, 85 games and 123 goals was a proud achievement by a very honest, durable and often spectacular player.

After heading home, Ray and his wife Jean operated the Cohuna Hotel for almost 20 years. During that time, the rustic country pub became something of a Mecca for Carlton players, ex-players, committee members and supporters. Meanwhile, Ray and Jean raised a large family that eventually included nine grandchildren and seven great-grandchildren.

Ray Garby passed away in March 2009, aged 86. A few days later, all of the Carlton players in the round 1, 2009 match against Richmond wore black armbands to honour his memory.

After the 1946 May 18 match against North Melbourne, Monday's Age said; "Garby, Carlton's brilliant forward flank player, showed the advantage a player possesses in being able to kick accurately with either foot. Though constantly watched and at time harassed by Jarrad (North Melbourne) he was easily able to outmanoeuvre him."