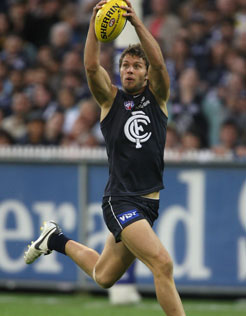 Edwards was drafted with pick #36 in the 2005 National Draft, taken as a bottom aged player for that draft. A footballer of great lineage, his father is Allan 'Butch' Edwards, his grandfather Arthur Edwards, and his great grandfather Frank 'Dolly' Aked Sr, all of whom have played at senior VFL/AFL leavel.

Edwards would play most of the 2006 season for the Northern Blues up forward, and was named as an emergency for Round 22 of his debut year, a fine effort for the young man. A bulked up Edwards would show promise for the Bullants, again up forward, in 2007, before being injured in Round 6. Thereafter, it was a tough slog from their on in for Edwards, as he failed to find any form whatsoever on his return from injury, but he persevered and was retained by the Blues for 2008.

With a number of recruits for 2008, there seemed to be some competition for spots but an early injury to Brad Fisher gave Edwards an opportunity, and in the last 2 practice games of the pre-season he kicked 2 bags of 3 to demonstrate an ability to support Fevola up forward, and still snag a goal or 3. These performances were enough to see Carlton Coach Brett Ratten announce Edwards' debut selection for Round 1 of the main season, a disappointing game for many, but one in which young Edwards' would take 8 marks and demonstrate beautiful hands as a leading forward. Edwards would also kick his first goal in the AFL in the first quarter of his debut, a dribble kick from a loose ball 2 metres out! He would follow up the next week against St Kilda and kick another goal.

Jake was dropped after the St Kilda but earned a recall for the Round 9 victory against Fremantle. Jake played a very good game where he picked up 12 disposals, 9 marks and a goal. He returned for 2 games mid-season, but after a season at the Bullants in 2009, was advised that he would be delisted come season's end, after 5 games in Navy Blue. Edwards was then invited to train with the Western Bulldogs over summer in hope of gaining a spot onto their 2010 playing list, but did not get picked up at the Kennel. He then headed to the Ballarat League to play with Darley. Edwards signed on to play with VFL Club Port Melbourne in 2011, where he was a member of their premiership side.

Carlton recruited Edwards from the Western Jets U/18's, he had previously played at Melton.