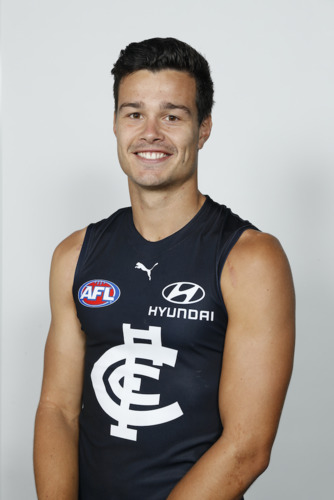 When Carlton drafted Jack Silvagni with the club’s fifth selection (no. 53) in the 2015 National Draft, the joy reverberated around Princes Park and across the country. The eldest son of Stephen Silvagni, and grandson of Sergio Silvagni, 18-year old Jack was born to play for the Navy Blues.

From his earliest years, Jack had been steeped in the history and traditions of the club where Serge and Stephen both forged magnificent careers. Serge played in two Premiership teams for the Blues, as well as captaining and coaching the club. Stephen also won two flags, on the way to being recognised as the greatest full-back of the 20th century.

With such a pedigree, Jack started his AFL journey well-prepared, although the weight of expectation was immense. Well aware of the pressures that would inevitably build on the youngster when and if he followed Serge and Stephen to Carlton, the Silvagni family had kept Jack grounded and his progress deliberately low-key.

“Mum and Dad always told me that it is family, school and football, in that order,” he said during an interview on draft day. “When the interleague and development squads were on and the Oakleigh Chargers first came knocking, Dad made a decision to keep me out of it,” he said. “I wasn’t overly happy at the time, but it was the right idea, because I wasn’t big enough.” Grandfather Sergio agreed, “He’s as skinny as anything — he needs to muscle up. But I’m looking forward to following him.”

While completing his VCE studies at Xavier College, Jack eventually joined the Chargers, where his versatility, aerial ability and sure hands saw him selected for representative honours with the Vic Metro squad in the Under-18 National Championships. Although he had primarily played in defence, he was switched forward in the match against WA and kicked six goals.

His coach that day – former Blue Mick Stinear – said afterwards, “He’s probably one of the smartest footballers I’ve come across. He has a really good footy brain and understands the game really well. He’s very good with his hands, very clever by foot. With his footy smarts, awareness and positioning he’s well ahead of a lot of others at that age level. He’s only had one year at TAC Cup level and a few championship games but he’s going to develop very quickly and will still need a couple of years to master his craft. I see him being dangerous at both ends of the ground. It’ll be his speed that will be the factor that determines how successful he is.”

Some four months into the 2016 season, Jack made his senior debut for Carlton on an emotion-charged Saturday night in round 15, when the Blues lost to traditional rivals Collingwood at the MCG. It was Andrew Walker’s 200th match, and the team wore black armbands to honour the recent passing of 1947 Premiership player Allan Greenshields. The main drawcard for Blues fans however, was to see the latest generation of Carlton royalty in action for the first time, and Jack didn’t disappoint. Playing forward, he set up an early goal for Jed Lamb with an accurate pass, and finished the game with 15 disposals, 6 marks and four inside-50 entries. Late in the final quarter, he should have kicked his first career goal after a strong mark in the right forward pocket, but instead short-passed to Bryce Gibbs, who missed with his shot from 30 metres out.

A week later, during the second quarter of the Blues’ heavy loss to Adelaide at the MCG, Jack wrapped up an opponent with a strong tackle in Carlton’s left forward pocket. Awarded a free-kick right on the boundary line, he threaded the ball between the posts to open his account, accompanied by an enormous roar from an excited crowd. From then on he played in all of Carlton’s remaining matches, and finished an excellent debut year with 7 goals from 8 games.

A strong 2017 followed with 19 goals and a Rising Star Nomination, before a tougher 2018 year followed - not just for 'JSOS' but for the whole team. Struggling to find space as a half forward, Silvagni spent time in the midfield and deep in defence.

Sergio and Stephen Silvagni both wore guernsey number 1 in their illustrious careers for the Blues. However, when Jack was recruited, Andrew Walker was still carrying it with distinction in what turned out to be his final year. Jack settled for number 2 in 2016, but at Walker's insistence, switched to the "family number" ahead of his second season.

Jack's younger briother Ben Silvagni was recruited in the 2018 National Draft at pick 70.