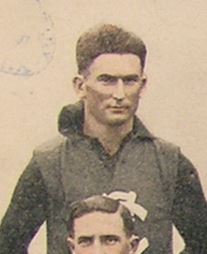 Carlton champion Horrie Clover spotted Denis at the Wangaratta - Rutherglen match June 06 1925. He offered him the choice of a number of jobs in the city and payment for matches. Kelleher declined the offer. (Corowa Free Press June 12 1925)

Originally from Wangaratta, and born in Baddaginnie (located between Violet Town and Benalla), Denis Kelleher, (popularly known as 'Dinny'), was a solidly built, hard-as-nails follower who relished the heavy going. He began with Carlton in 1927 and played 54 VFL games over the next six years before crossing to South Melbourne.

In his first season there he combined with Jack Bissett and Terry Brain to give the southerners arguably the best first ruck combination in the league. In any case, it was good enough to help secure a premiership in 1933, and to keep the club at the forefront of the game for the ensuing four seasons, in all of which Kelleher featured strongly.

He left South at he end of the 1936 season having added another 59 VFL games to his tally. Between 1939 and 1941, he captain-coached City in the NTFA, steering the club to premierships in 1939 and 1940. His final involvement in top level football came in 1946 when served as non-playing coach of North Hobart. 1

1932
The Camperdown Chronicle June 23, reports;
"Negotiations for a coach to succeed Vickers at Camperdown were well in hand last week and an arrangement had been made with Dan Kelleher of Carlton to accept the position of coach with Camperdown, contingent, upon him receiving a clearance from Carlton.
This matter was dealt with at a meeting of the Carlton club on Tuesday evening, when Kelleher was successful with his application for a clearance. Carlton wished to retain the player's services, but, in view of the fact that Kelleher was out of employment, the committee unamimously decided to grant the clearance, and Carlton will thus lose one of it's best ruck men.

The new coach is recognised as one of the finest ruck men in the league and should suit the Camperdown team to perfection, being rugged and forceful and especially good in the air.

He will be in Camperdown to-day and make his first appearance at training to-night, when it is hoped that there will be a full attendance of players to benefit from his initial activities. He will also field with Camperdown against Mortlake on Saturday and the strengthening of the team is expected to bear fruit immediately."

A previous report in the paper on Tuesday 21 said that D. Kelleher had been recommended to the past Camperdown Football Club president Mr. R. Gill, by the present Carlton Football Club captain F. Gill.
He had represented Victoria as a ruck man in interstate games, Kelleher is 5 foot 10 inches in height, and weighs 14 stone 7 pounds.

1937 "Dinny"Kelleher was playing for Murtoa, in the Wimmera League.

1983 - Former VAFA Ruck Rohan Brown to debut for the Blues.