Carlton too good for Brisbane on a Saturday night at the Gabba. Fevola the star with 8 goals.

Matched against a dangerous interstate rival with a 6-4 win-loss record, this was a massive game for Carlton. The Lions were already a major threat to our finals aspirations, and a loss to them at this point in the season would have been catastrophic. The Blues omitted Jordan Russell, Mitch Robinson and Mark Austin from the team that beat West Coast, and welcomed back Heath Scotland, Andrew Carrazzo and Shaun Grigg for this trip to the Gabba in Brisbane. Nearly 34,000 fans (a clear majority of them in navy blue) packed the ground on a cool, calm winter Saturday night in the northern capital, and gave our boys a rousing reception when they ran out on to the ground.

In the usual shuffle of positions, Brisbane gambled by playing Daniel Bradshaw in defence to mind Brendan Fevola, while Carlton double-teamed Jonathan Brown with Michael Jamison and Bret Thornton. In other match-ups, Steven Browne went to the Lions’ gun recruit Daniel Rich, and Aaron Joseph picked up their volatile small forward Rhan Hooper.

After a scrappy start, Brisbane scored the first major through Brennan, and Fevola kicked his first after two more gettable chances went begging. The Blues were the better team, but inaccuracy was costly and only a set-shot goal after the quarter-time siren by Kade Simpson allowed us to lead by 10 points.

Brisbane suffered a big setback in the second term when their defensive sweeper Josh Drummond damaged an ankle and was forced off the field. This unsettled their backline and the Blues’ midfield runners – led superbly by captain Chris Judd, Marc Murphy and Bryce Gibbs – took control. They pumped the ball forward time after time to where Fevola was prominent, working hard on the lead and grasping most opportunities, but his radar was off and he had 3.3 at half time. Still, Brisbane were kept in contention by the mercurial talent of Jared Brennan, who kicked two goals in a minute in this term, and was a constant and unpredictable threat.

Brisbane coach Michael Voss bowed to the inevitable after half time, and shifted Bradshaw into attack to support Brown. This left the under-sized Joel McDonald to mind Fevola, but also straightened up Brisbane’s attack by giving the Lions viable forward targets. Brown and Bradshaw kicked three goals between them in this third quarter, but Fevola also steered through three – taking his tally to seven - and at the last break the Blues were looking like winners.

However, all night the outer, or school end of the Gabba had been the scoring end – something of a mystery on a calm Brisbane evening. The Lions kicked that way in the last term, and alarm bells started ringing when their veteran stars Luke Power and Simon Black sparked a spirited comeback. Power goaled soon after the restart, then Rich Broke free and twice kicked long into the forward line. The first bomb brought a mark and goal to Brown, and the second bounced through to cut the margin to 18 points. Fevola and Carrazzo added goals for the Blues, but Sherman and Bradshaw replied. Rain started falling with five minutes left, and a captain’s goal by Chris Judd gave the Blues breathing space and a 12-point break. Brown marked and goaled again for the Lions, but time ran out, and a huge roar greeted Carlton’s victory on the siren. We'd had six more scoring shots, and won by a six-point margin.

Brendan Fevola finished with eight goals in another powerful game at full-forward, Murphy, Judd and Gibbs were busy and productive all night around the stoppages, while youngsters Dennis Armfield and Steven Browne turned in impressive efforts. Aaron ‘Handcuffs’ Joseph continued his superb debut season, and collected another scalp by shutting Hooper out of the game completely. Hooper, who had kicked 46 goals in his 43-game career prior to this match, was held to only four possessions (2 kicks and 2 handballs) by the tough young Tasmanian, who added insult to injury by pestering Hooper into giving away three free kicks.

Setanta Ó hAilpín kicked another opportunistic goal, and became the 297th player to play 50 senior league games for Carlton. ‘Carlos’ is the eighth Blue to reach 50 games in guernsey no. 17, but only the ninth Carlton player over 196 cm (6’ 5”) to reach the 50 game milestone.

The average age of this Carlton team was 23 years, 254 days, with an average League experience of 80.3 games per player. Nick Stevens was the oldest, at 29 years, 154 days, and the most experienced with 223 games. Jeffery Garlett was the youngest, at 19 years and 307 days, playing in only his fifth senior game.

This victory by 6 points was by the same margin as Carlton’s last game at the Gabba last season and only the sixth time Carlton has won consecutive matches by identical margins at the opposition’s home venue.

50 Games: Setanta Ó hAilpín
Interesting Fact: For the first time in his career, Brendan Fevola would hit the average of 3 goals per game after 8 in this match. This is a very rare feat in Carlton's history.
Interesting Fact: As above, this is only the 6th time in our history we've won consecutive matches away to the same opponent by the same margin 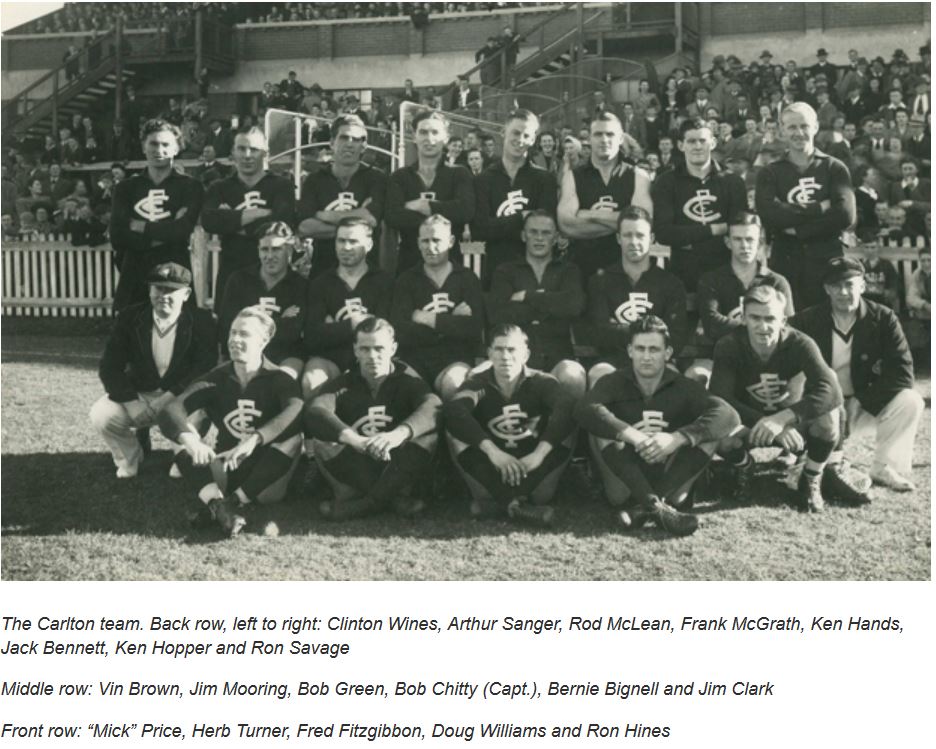