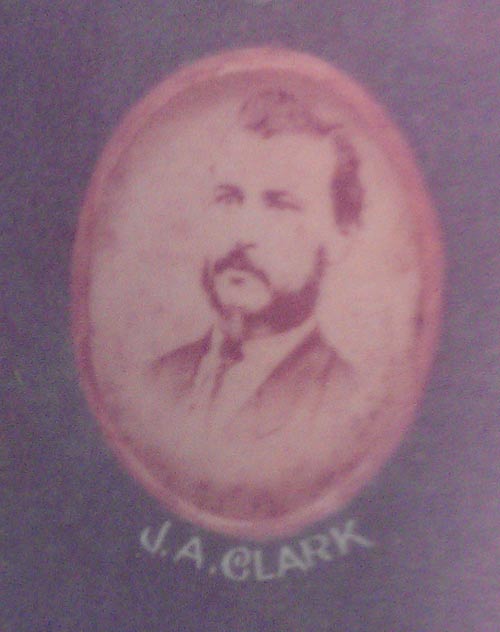 J. E. "Sprinter" Clarke/J. Clarke/ J. A. Clark/ J. Clark.
There is some confusion, various spellings of names.
Two players, J. E. Clarke and J. Clarke both played in the same era and in the same sides.
As yet the Blueseum has not uncovered a J. Clark, (no E), so this also adds to the confusion over the player.
Now adding to the confusion is the mention of a William Clarke by H.C.A. Harrison in an interview with the Referee newspaper. See William Clarke's bio. page.
Although the 1871 Challenge Cup winners photo shows a J. A. Clark, this is believed to be Jim E. Clarke.

1864 There was a J. Clark a "sprightly forward", who played in Carlton's very first match.
(The Carlton Story, H. Buggy and H.Bell p.6)

Brian Hansen spells Clark's name with an 'e' (The History of The Carlton Football Club p.12)

1865 April 29
J. E. Clarke is entered in a 100 yard handicap flat race in the Amateur Athletics Day held at the Warehousemen's Oval Ground St.Kilda Park.
Clarke is the only runnner running off scratch.
He also entered the running high jump and the quarter mile hurdles running off 15 yards.
J. E. Clarke won the 100 yard race and the running high jump.

Bell’s Life. May 12 1866.
Carlton Club. The opening match of the season took place Saturday last, at Princes Park, between sides chosen by the President and Vice President and after a very well contested game victory was declared in favour of the latter, they having obtained two goals which were splendidly kicked by J.E. Clarke.
The play of Hillsden, Harry Guy, Tom Gorman, W. 'Bill' Gorman, R.McFarland , O'Brien , Wilton Barfoot and Lock for their respective sides was also exceedingly good.

The first rules of Australian Football required the ball to bounced every 10-20 yards, but this rule were being abused.
1863 Royal Park vs Melbourne.
Theophilis S. Marshall Royal Park captain wanted the rule to be defined once and for all.
He asked J.E.Clarke that when he gets the ball to run as far as he could without bouncing.
He did and ran more than 50 yards.
H.C.A. Harrison the Melbourne captain was stunned and asked Marshall what this meant, and Marshall said that he wanted question resolved.
It was then agreed that the ball had to bounced every 10 yards.

1866 the revised laws required the ball to bounced every 10 yards.

(Everything You Wanted To Know About Australian Rules Football But Couldn't be Bothered Asking. Graeme Atkinson. P164.)

1866 May 8
Delegates from Carlton, Melbourne, South Yarra and the Royal Park clubs met at The Freemason's Hotel in Swanston Street to draw up a new set of rules.
One of the Royal Park representatives was J. E. Clarke, the other was H. Chadwick (Harry Chadwick?)

1866 June 9
Carlton played South Yarra in a Challenge Cup match.
The 20 players named in the Carlton team include two players with the name Clarke.
J. E. Clarke and J. Clarke.

1868 The Argus has Clarke named in the Carlton side to play Geelong on Monday 25th. May.
Named in squad to play Emerald Hill at Emerald Hill Saturday 6th. June 1868.

1992 Rd 8 - Earl Spalding gets a clearing kick ahead of Mick McGuane.