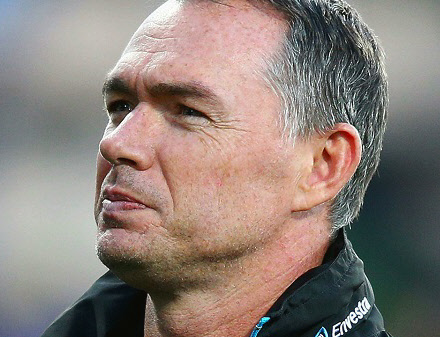 Alan Richardson is a former Collingwood defender who had been an assistant coach at three other AFL clubs before he was appointed as deputy to Brett Ratten at Carlton in 2011. Widely regarded as a senior coach in waiting, he had been short-listed for the top job with three other teams prior to joining the Blues, but as things panned out, he was be forced to bide his time for a few more years.

On the field, Richardson had been an athletic running half-back; a late developer who started with North Melbourne Reserves and was delisted without playing a senior game. Given another chance at Collingwood in 1986, he eventually played his first senior match for the Magpies one week before his 22nd birthday in 1987. However, he didn’t establish himself permanently in Collingwood’s line-up until 1990, and was desperately unlucky to miss a place in the ‘Pies victorious Grand Final team that year. After playing well in all of Collingwood’s lead-up finals, he damaged a shoulder against Essendon in a Semi Final, and failed a fitness test on the Thursday prior to the decider.

After 114 games for Collingwood, Richardson retired from AFL football in 1996. He then returned to his original club; East Burwood in the Eastern Football League, as captain-coach, and won back to back flags in 1999-2000. In 2001 he retired from the field to coach Coburg in the VFA, and his efforts there saw him back in the AFL in 2003 as an assistant coach at the Western Bulldogs.

Richardson’s three years at the Western Oval concluded in 2005, after which he was recalled to Collingwood as an assistant to Mick Malthouse. When that contract expired in 2008, Essendon snapped him up, and Carlton did the same two years later. Working alongside senior coach Ratten throughout 2011 and 2012, Richardson was praised for his sharp perception and diligence as the Blues made it as far as week two of the finals in both seasons. But when Ratten was dumped by the club late in 2012 to make way for Malthouse’s arrival, Richardson decided to move on too.

In 2013, Richardson moved across to Port Adelaide as Director of Coaching, and as senior assistant to first-year senior coach Ken Hinkley. Strugglers over previous years, the Power enjoyed a fairytale resurrection as they fought their way through to the Grand Final, only to fall to a steadier Hawthorn. Meanwhile, St Kilda had sacked their incumbent coach Scott Watters. In November 2013, to the intense annoyance of Port Adelaide, they signed Richardson as senior coach on a three year contract.