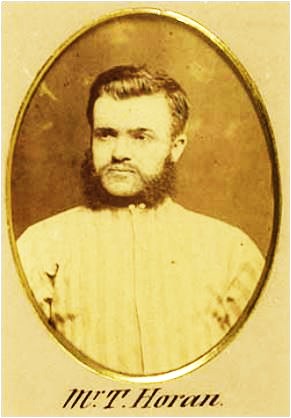 1881 August 27th
Horan played in the drawn game (3-3) against Melbourne at the Melbourne ground.

Is this the same person?
If Thomas Horan played football in 1881 he would have been 26 or 27

Tommy Horan, aged 16 in 1870, played cricket for the Carlton club and in 1872 played in a Victorian team against the visiting English side.
Thomas Patrick Horan, March 8 1854 (1855 another report), Middleton Cork Ireland, - April 16 1916, Malvern Melbourne.
Played 15 Tests for Australia; R.H. Batsman and Bowler
Australian Test Cricketer No.8

The Carlton Cricket Club (July 1871) in its annual report for the 1870 - 71 season mentioned "....the appearance of the two boy colts, John Blackham and Thomas Horan ...." (Australasian July 22)
Horan emigrated to Victoria as a young boy and attended school in Fitzroy where he met (to be famous wicket-keeper) John Blackham and the two became life long friends on and off the cricket field.

Horan wrote about cricket for many years using the name of "Felix" in the Australian (Australasian?)

Tommy Horan was the Australasian's cricket writer who wrote for nearly 40 years under the nom-de plume "Felix", he occasionally wrote about former footballers.
He was a member of the first Australian cricket team to tour England in 1878. A year later he was a cricket writer for the Australasian newspaper until his death.