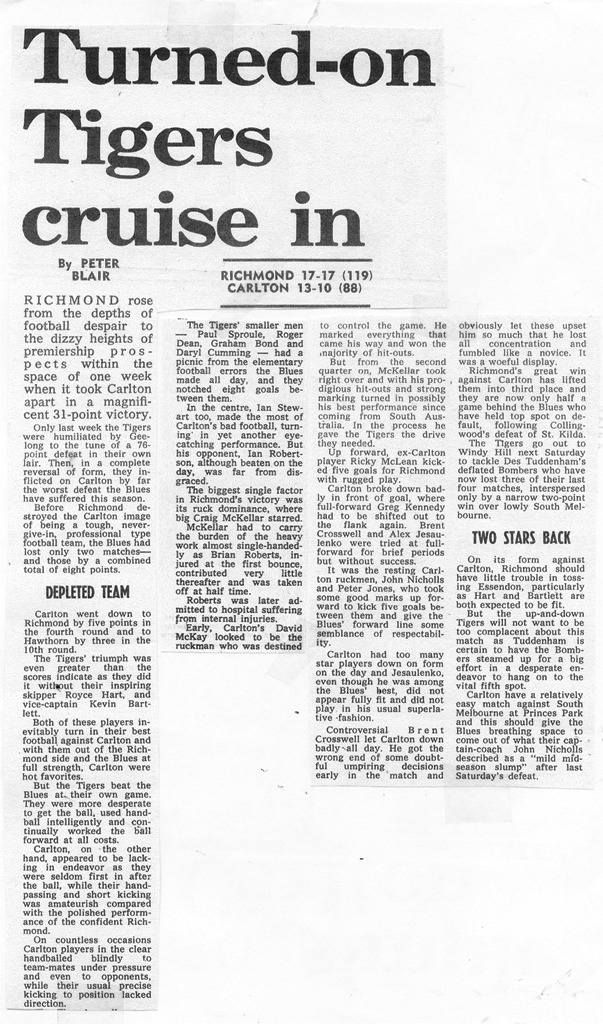 Carlton's good win over Collingwood, and Richmond's heavy defeat by strugglers Geelong in the previous round, saw the Blues start warm favourites against the Tigers at the MCG. However, Richmond proved more determined and more cohesive than the Blues, and led at every change to win by 31 points.

This was a shock loss - Carlton's third during the home and away season, and our second at the hands of Richmond - but would prove to be our last for the year.

There would be three more games for the Blues against Richmond in season 1972; the Semi Final, the Replay and of course, the Grand Final.


The Tigers showed further proof of their supremacy over the Blues when they recorded their fourth win in a row over them at the MCG. Carlton have won only one of their last six matches against Richmond at the MCG and three of the last 12 games against the Tigers over the same period. - Football Record.


The Tigers roar again
Richmond on Saturday surprised the football world and especially the Blues by their remarkable improvement from the previous week. This is not unexpected of any top side which is beaten. But what made it more remarkable was the fact that it was almost the worst side - on paper - Richmond had picked this season, and it was up against the greatest side in the League. It again proved that football ability, class and teamwork are not sufficient to guarantee victory. When a team is down and comes back fighting like a tiger anything can happen. Statistically there wasn't a great deal of difference between the two sides. McKellar's effort in the ruck helped offset Carlton's ruck strength of Nicholls and company. Ian Stewart's classy game in the centre was a relief for Richmond, and Ricky McLean, who just a short time ago swapped from the Blues, had only eight kicks but managed five goals. Carlton are still the side to beat for the premiership. This loss to Richmond is a setback, but could be a blessing in disguise. If Carlton are to be beaten it is better to be by a top side, and they will come back more determined than ever the next time. - Polly Farmer: The Australian.


Richmond cannot be discounted
Richmond had a remarkable form reversal by outplaying League leader Carlton in last Saturday's clash of the heavyweights. Ironically, it was Carlton captain-coach John Nicholls who indirectly contributed to his team's loss. Nicholls settled an old score with Richmond's Brian Roberts at the first bounce. But when Roberts did not return to the field after half-time, Craig McKellar seized the opportunity to completely dominate the ruck contests. The disappointing aspect form Carlton's point of view - leaving any comment on the umpiring aside - was that its players refused to contest the issue to the final siren. - Michael Stevens: The Australian.


Richmond thoroughly deserved their win. I was disappointed in our players performance although I had been half expecting an effort like that as we are going through a flat spot. I was particularily disappointed in our last 15 minutes when we lacked endeavour, but I know the players will learn a lot from that. I hope in the future that umpires will give the players going for the ball the protection they deserve. - John Nicholls.

1989 - Jezza addressing the players at training.