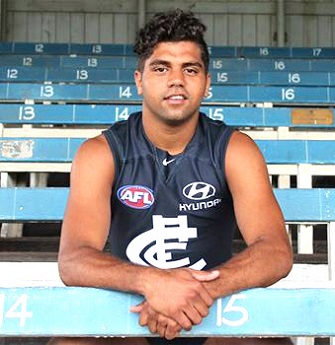 
Prior to the 2014 National Draft, a number of respected commentators rated West Australian Clem Smith among the most naturally-gifted prospects from that state. Although just 177 cm tall and 77 kg, Smith was a quick and agile type, who played his football with flair and aggression.

Originally from the Thornlie Junior Football Club, Smith was selected as an All Australian at Under-18 level in 2013. By the time he was drafted by Carlton at selection 60 in the following years’ draft, he had already played 10 senior games for Perth in the WAFL, and had performed well against experienced opposition.

That stood him in good stead at Carlton, and although there were some concerns about his endurance, he was selected for his first senior appearance as the Navy Blues’ substitute in the opening game of the 2015 season against Richmond on a Thursday night at the MCG. Wearing Carlton’s iconic number 25, Clem took his place on the bench at the first bounce, and his nerves were no doubt still jangling when Dale Thomas was injured in the first 60 seconds of play. Five minutes later, Clem ran out on to the ground in front of 83,000 roaring spectators.

Carlton lost that match, as well as the next two. By mid-year, the Blues were deep in crisis when senior coach Mick Malthouse was sacked, and from then on the club spiraled ever downward to collect another wooden spoon. Smith played another six games over the season – three more as substitute, and another three from the interchange bench - without experiencing the joy of his first victory.

By December 2015, Clem was already well into pre-season training when an incident occurred that put him offside with Carlton’s new coach Brendon Bolton. After an evening out on the town, Smith was involved in a late-night street fight that required police intervention. Although no-one was badly injured and no charges were laid, the resultant news reports didn’t please the club or the coach.

Whether that harmed the relationship between player and coach or not, Smith didn’t play another senior match. He spent all of season 2016 at VFL level with the Northern Blues, and was released at season’s end.

Smith would return to play for Perth in the WAFL for the 2017 season.

2018 - Clem Smith would play for North Albury in the Ovens and Murray FL.