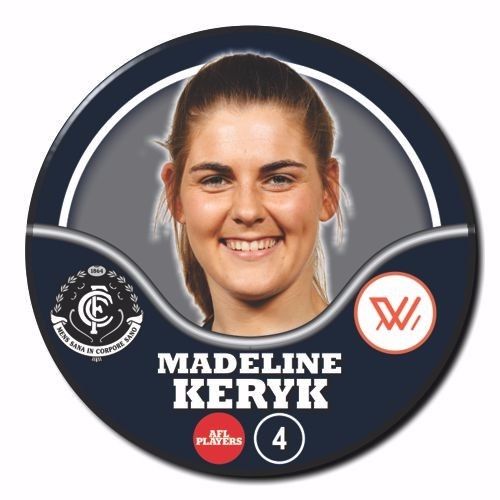 A hard-running inside midfielder, co-vice-captain Keryk knows how to impact stoppages. The 21-year-old’s versatility means she can also move up forward, creating an awkward match-up for the opposition. Senior women's coach Damien Keeping says Keryk is a wonderful team player that exudes positivity. “Madeline has the ability to bring others into the game, and I know she will be an extremely encouraging teammate,” Keeping said. “She has a super work ethic and an infectiously positive nature.”

She was drafted by Carlton with the club's fifteenth selection and the one hundred and fifteenth overall in the 2016 AFL Women's draft. She made her debut in round 1, 2017, in the club and the league's inaugural match at Ikon Park against Collingwood. At the end of the 2018 AFLW season the Blues delisted Laura Attard, Madeline Keryk, Sarah Last and Kate Shierlaw from their primary playing list. Keryk was redrafted by Geelong with the 62nd overall pick in the 2018 AFL Women's draft..

Madeline Keryk's footballing ability was recognised by Geelong's AFLW coaching panel and recruited her for Geelong's AFLW team for the 2019, she was taken in the sixth round with pick # 62. In the round 4 clash against the Blues Keryk starred in defence and would feature in the AFLW Coaches votes for that clash.