The second Blue to play at five VFL clubs. 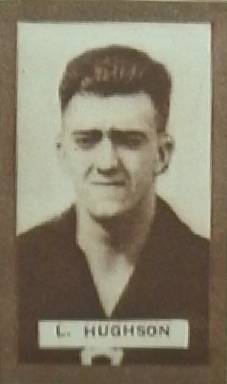 The oldest of three talented brothers who all played VFL football for Fitzroy, Les Hughson was the odd one out in that he also pulled on the colours of four other clubs – including Carlton. In so doing, Hughson became only the second Blue (after Les Abbott in 1905) to have played at senior level for five different teams.

Tall and well-built, Hughson was a fierce but fair competitor who was recruited by the Blues from VFA club Preston in 1933. Six years earlier, he had played one match for Collingwood, before moving on to Hawthorn in 1928 for another four appearances. In 1929 he crossed to Preston, and became one of the outstanding follower-forwards of the VFA. Durable and determined, he was a willing worker around the packs, as well as a reliable set shot for goal.

When Carlton eventually convinced the big fellow to have another shot at elite-level football, they backed up their confidence in him by offering him the club’s number 1 guernsey. He played nine games and kicked six goals in his debut season, much of which was spent in a forward pocket – no doubt marvelling first hand at the brilliance of Carlton’s champion full-forward, Harry ‘Soapy’ Vallence. Les capped off the year with his first taste of finals football, in a 13-point first Semi Final loss to Fitzroy.

Season 1934 began full of promise for Hughson when he was given the chance to play at centre half-forward in round one against Hawthorn, but things went awry when he was relegated to 19th man for round three against Richmond. Les wasn’t happy about sitting on the bench that day, and apparently made his feelings clear. As a consequence, he was omitted for two weeks, before being re-instated for Carlton’s clash with North Melbourne at Princes Park in round 6. Back in a forward pocket, he had another grandstand view as ‘Soapy’ kicked 7 goals and Carlton handed out a 62-point hiding to the hapless Shinboners.

Sadly, Hughson never played again for Carlton after that big win. Perhaps still a bit resentful, he walked out of Princes Park mid-season and joined St Kilda, where he notched up another 41 games over the next three seasons. By 1937, both of Les’s younger brothers; Fred and Michael, were playing at Fitzroy, so it is understandable that Les was drawn to joining them. Fred Hughson was on the way to becoming one of the great full-backs of his era, while the youngest of the trio, Mick, was emerging as a star centreman for the ‘Roys. Les was 30 years old and in the twilight of his career by then, but his one year at Brunswick Street contributed a valuable 15 games and 12 goals to the Maroon’s cause.

Two years after Les played the last of his 73 games of VFL football, the second major war of the 20th century began. By then, he was living in Stawell, happily married and the father of five children. But anxious to contribute in his country’s hour of need, he enlisted for active service with the Australian Army in 1941, and spent the next three years in northern Australia as a linesman with a signals unit. Eventually, he returned home safe in December 1945 – in time to enjoy watching from the grandstand as his brothers both completed their impressive careers at Fitzroy.