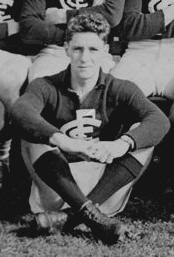 Born and bred in Bacchus Marsh, and schooled at CBC Parade, Carr was barely 18 when he joined Carlton in 1947. On the eve of his first senior appearance in July of ’47, he earned the following paragraph in the sports pages of The Argus newspaper;

"Many good footballers have come from Bacchus Marsh, and Carlton are happy about the form of Les Carr, centreman, who is doing so well with the seconds that he has been placed among the emergencies for tomorrow. Aged only 18 years, Carr is thickset, has good disposal, and knows the game. At his home town he is, they say "the best since Whelan". *

Making his senior debut against Melbourne in round 12, Carr played eight consecutive matches through until round 19, when the ladder-leading Blues suffered a 2-point loss to Geelong at Kardinia Park.

Then, as the finals loomed, Carlton captain Ern Henfry and star ruckman Ken Hands were welcomed back from injury. Both were automatic inclusions for the Second Semi Final against Essendon, so Les and defender Ron Boys were the two unlucky omissions. A fortnight later, Henfry led the Blues to a celebrated last-gasp victory over the Bombers in the 1947 Grand Final.

Despite deep disappointment at missing a place in that Premiership side, Les stayed on at Princes Park for another year. His opportunities were limited however, and his only senior game in 1948 was his last – a five-goal win over Fitzroy at Brunswick St in round 13. At the end of that season he went home to Bacchus Marsh, where he was to enjoy a lengthy career playing for (and later coaching) the neighbouring Darley Magpies. In early 1951 Les was appointed playing-coach of Quambatook in the Kerang League.

Les wore guernsey number 34 in each of his nine games for the Blues, and the lasting friendships he made with team-mates like ‘Soapy’ Vallence, Bert Deacon and Max Howell led to a long and valued contribution to Carlton’s Past Players Association. 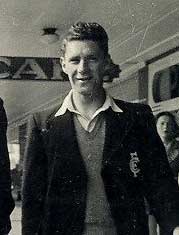