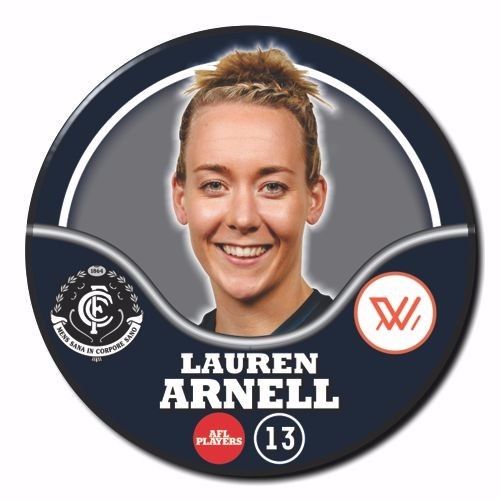 Arnell was signed as a priority player by Carlton in August 2016 ahead of the league's inaugural 2017 season. She had previously worked at the club in an off-field role, including in the development of Carlton's bid for a women's team license. She was named the club's inaugural AFL Women's captain in January 2017. She made her debut in round 1, 2017, in the club and the league's inaugural match at Princes Park against Collingwood. Carlton signed Arnell for the 2018 season during the trade period in May 2017.

Arnell grew up on a cattle farm in the Victorian town of Clarkefield, 46 kilometres northwest of Melbourne. She spent her later teenage years in Lakes Entrance in the state's east. She is one of three triplets. Arnell studied physical education teaching at the University of Ballarat and has previously worked as a school teacher. Off-field Arnell works as AFL Victoria's education and training manager.

Arnell played just one football match as a junior, in a school tournament in her last year of primary school. A talented state-level junior basketballer, Arnell next played football in 2005 while studying to be a teacher in Ballarat. Arnell first played football competitively for North Ballarat before moving to the Darebin Falcons in the Victorian Women's Football League (VWFL) where she would win nine league premierships through the end of 2016. In 2010, Arnell was selected as one of forty players to participate in the women's AFL high-performance camp. As part of the program she played in a curtain-raiser exhibition match ahead of the round 12, 2010 AFL match between Melbourne and Collingwood. She has represented Victoria at the AFL Women's National Championships on six occasions and been selected three times as an All-Australian. Arnell was drafted by the Western Bulldogs with the twelfth overall pick in the 2013 exhibition series draft. She played for the club in exhibition series matches through the end of 2016.

Arnell Carlton's inaugural Captain.
Prized recruit Lauren Arnell will captain the Blues in their inaugural AFLW season. The Club was granted permission from the AFL to pre-sign Arnell as a priority selection due to her existing relationship with Carlton. Hailing from Clarkefield in Victoria, Arnell, an inside midfielder, played basketball until she was 17 years old, before taking up football in 2005. Earlier in 2016, the eight-time Darebin premiership player became the Blues’ first Visy Female Football Ambassador, and played a pivotal role in shaping Carlton’s successful bid for one of the eight licences. Recruited from: Darebin Falcons (VIC) The woman who played an integral role in securing Carlton’s AFLW licence will now lead the club in its inaugural season. Lauren Arnell, an eight-time Darebin premiership player, became Carlton’s first female football ambassador in March last year as the club pushed to field a team in the first AFLW season. It paid dividends. And when the Blues secured the licence, they were quick to sign Arnell as a priority pick. Five months later, Blues football operations manager Andrew McKay announced Arnell as Carlton’s inaugural AFLW skipper. “Lauren shows a willingness to invest in others and she really understands where the game has been and where we as a collective can take the game,” Blues coach Damien Keeping said. “She’s able to influence others on that pathway and that was really attractive to us from a leadership perspective.” Leadership group: Lauren Arnell (captain), Brianna Davey and Madeline Keryk (vice-captains). - Ben Waterworth; Fox Sports.


Arnell: 'We learnt plenty'
Carlton AFLW captain Lauren Arnell says her side is in a “very good position” ahead of its clash against an in-form Melbourne at Casey Fields on Saturday. The Blues had top spot within their grasp against Adelaide on Sunday before an Erin Phillips wonder-goal consigned them to a three-point loss – their first of the inaugural season. The defeat saw Carlton drop out of the coveted top two, but Arnell said the Blues had quickly switched their sights to their next opponent. “It’s important for the whole group to remain positive and remember that we’re in a very good position in this competition right now,” Arnell said. “We’ve put a real emphasis on culture and we’ve always said we’re 28-strong in our leadership. The responsibility for all of us as individuals and as a group is to stay focused on what we do.” That focus and leadership will be put to the test against the red-hot Demons, who are coming off wins over Collingwood and the Western Bulldogs. The Blues defeated Melbourne by 43 points in a practice match at Ikon Park a month ago, piling on six unanswered goals in a blistering final term. Making the challenge harder this time round is the fact that the Blues will be without injured key defenders Sarah Last (ACL) and Bri Davey (back). Arnell is confident, however, that the lessons learned against Adelaide will hold the Blues in good stead on Saturday. “We learnt plenty. Going away as a group for the first time was a great opportunity to spend extra time together away from the footy club,” she said. “Playing in a different environment is really important and that will help us going into the game at Casey Fields this weekend. “For two weeks in a row, we’ve had the experience of performing under pressure when the game is close. I think we’ll be better for it.” Carlton faces Melbourne in AFLW action on Saturday as part of a double-header with the JLT Community Series. - Carlton Media February 23, 2017

Arnell is the niece of former Footscray footballer Ray Walker.

After a quiet second season for the Blues in which Arnell was dropped she requested a trade to the Brisbane Lions, in essentially was a three way swap. Arnell became a Lion, young Brisbane defender Nicole Hildebrand became a Magpie and the Blues received the Magpies fourth round pick (currently No.40 at this stage).

Arnell Departs the Blues
Carlton has received pick No. 40 in this year’s NAB AFL Women’s National Draft from the Brisbane Lions in exchange for Lauren Arnell. It marks the Club’s first deal of the official AFL Women’s trade and sign period after it commenced on Wednesday 23 May. Arriving at Ikon Park at the start of 2016, Arnell played a vital role in Carlton’s successful bid to compete in the first AFLW competition. A decorated premiership player with the Darebin Falcons, the 31-year-old was recruited to the Blues as a priority pick and was fittingly appointed Carlton’s inaugural AFLW captain ahead of the 2017 season. Head of Football Andrew McKay thanked Arnell for her substantial contribution to the Club’s AFLW program. “We are tremendously grateful to Lauren. She played an instrumental role in establishing our women’s football program and will always be acknowledged as an integral contributor to the Carlton Football Club,” McKay said. “With an eye on the future, Lauren was looking for more opportunity in an on-field capacity, so we fully supported her decision to pursue the opportunity up north and believe this deal is a win for all involved. “We wish her well for the coming season as she continues her career at the Lions.” Carlton now currently holds picks Nos. 3, 16, 27, 38, 40, 48 and 49 in this year’s NAB AFL Women’s National Draft. - Danielle Balales, Carlton Media.

On 28 May 2018, Arnell moved to Brisbane in a three-way deal in which Carlton received pick 40 and Collingwood received Nicole Hildebrand. Ahead of the 2021 AFL Women's season, Arnell made the decision to retire at the end of the season, a decision she announced in April 2021, following Brisbane's 18-point victory over Adelaide to claim the premiership.

Arnell was appointed as the inaugural coach of Port Adelaide's AFLW side in April 2022, making her the first former AFLW player to become a senior coach.