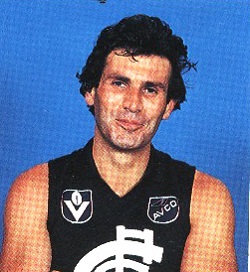 In late 1975, when Hawthorn agreed to clear their 1971 Premiership star Kevin Heath to Carlton, popular commentator Lou Richards wrote that Heath was ‘Carlton's best buy since the first load of bricks for the George Harris stand.’ A match-hardened, left-footed 188 cm defender who had played 140 matches and kicked 43 goals in nine seasons with the Hawks, Heath had fallen out of favour at Glenferrie Oval, and moved on to Princes Park by mutual consent.

Prior to joining the Hawks, Kevin Francis Xavier Heath had been an outstanding all-round sportsman at Assumption College. Hawthorn gave him a thorough grounding at Under 19 and Reserves level, and he made his senior debut as an 18 year-old in 1968. Three seasons later, the free-running ruck-rover represented Victoria on the first of two occasions, and was one of the Hawks’ best in their dramatic 7-point win over St Kilda in the 1971 VFL Grand Final.

Later, Hawthorn groomed Heath as a key defender, but by 1975 the emergence of Peter Knights and Chris Mew at Glenferrie had relegated him to the role of understudy. Midway through that season, Kevin and his coach David Parkin clashed heatedly over accusations that Kevin lacked concentration in big matches. Ultimately, he was left out of Hawthorn’s Grand Final team that was hammered by North Melbourne, and that decision led to Heath and Hawthorn agreeing to a parting of the ways. Princes Park was Kevin’s preferred destination, and the Blues had their cheque book ready.

At Carlton, Heath was given guernsey number 18, and slotted nicely into the back pocket of an already miserly defensive unit. He made his senior debut in navy blue in round one of 1976, on the day that Carlton farewelled our champion wingman Gary Crane by handing out a 57-point thrashing to Collingwood. Throughout the rest of that long season of 26 games, Heath didn’t miss a match, but the year ended in disappointment when North Melbourne beat Carlton by just one point in a cracker of a Preliminary Final.

Heath went on to give Carlton solid service for five seasons. Stationed almost permanently in a back pocket to mind the opposition’s resting ruckmen, he played finals football again in 1978, but ultimately was to encounter the same circumstances as he had at Hawthorn.

When Alex Jesaulenko took the reins as captain-coach of the Blues in 1978, he made it clear that he preferred the mercurial aerial skills of David McKay on the last line of defence. This meant that Heath was either shifted across to full-back, or squeezed out of the side completely. He was a more than capable back-up however, and provided valuable flexibility to Carlton’s defence on the way to the 1979 Premiership.

Heath announced his retirement from VFL football in 1980, after he was overlooked for a place in Carlton’s deeply disappointing finals campaign. By then aged 30, he finished with an impressive career record that spanned 218 games, including a Premiership and two appearances in the Big White V.