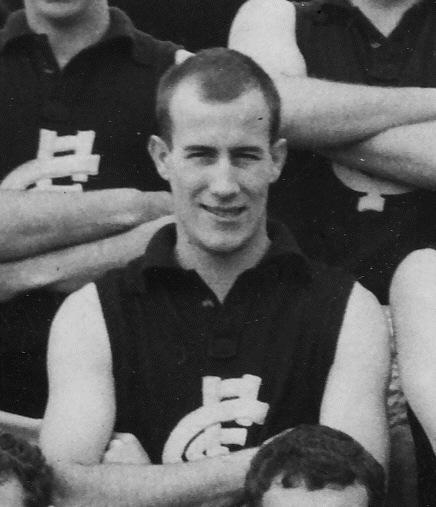 
After commencing his senior football career at South Fremantle, John Reilly was recruited by Carlton in 1962 as a ruckman-forward. His first three seasons at Princes Park were rather unspectacular, until his new captain-coach Ron Barassi shifted him to full-back in 1965, and Reilly blossomed into a fine, reliable defender.

By the time Carlton came knocking at their door in 1961, the Reilly family was already an institution at South Fremantle. One of John’s uncles; Jack ‘Corp’ Reilly, was a Bulldogs legend, and various close relatives - including John’s brother Graeme – had also worn the red and white colours of the club.

A few short months later, John Reilly wore guernsey number 26 when he sat on the bench as 20th man for Carlton on debut against Geelong at Princes Park in the opening round of 1962. The Blues lost by 39 points to a slick Geelong combination, in a match remembered as the first VFL appearance of Cats champion Graham “Polly” Farmer. During the rest of that first year, Reilly made another six senior appearances – all off the bench – on the way to winning the Reserves Best and Fairest.

In round 10, 1963, John played his first full senior game at last when he deputised in the ruck for his captain John Nicholls (who was on duty with the state side) in Carlton’s loss to Melbourne. Highlighting a game that was otherwise forgettable, Reilly kicked the only goal of his Carlton career, as the Blues lost by 28 points. When Nicholls returned, Reilly was retained in the side as the back pocket ruckman, and the first signs of his defensive abilities began to show.

In 1964, Reilly played only eight games as the winds of change began to blow at Princes Park. The team finished tenth, sparking a coup at committee level, and the sensational appointment of Melbourne captain Ron Barassi as captain-coach of Carlton for five years. It was a decision that had a huge impact on many players’ careers – including John Reilly.

One of the many tactical moves that Barassi made in his first year was to play rugged defender Wes Lofts as a key forward, and in round 4, 1965 the man he turned to to replace Lofts at full-back was Reilly. Carlton destroyed North Melbourne by eleven goals and Reilly was most impressive. From then on, right through to round 16 – when Collingwood knocked over Carlton at Princes Park – Reilly anchored the Blues’ defence.

Barassi obviously had a rethink after that, or perhaps he decided Reilly needed a break. Lofts returned to full-back for the last two matches of the year, and Reilly finished off the season with the Reserves. The Blues had jumped from tenth to sixth on the ladder under Barassi, and Reilly had found his niche on the field. But further changes were in the wind.

Before the next season began, Reilly surprised by asking for a clearance to Footscray. Perhaps convinced that he would always be in Lofts’ shadow at Carlton, and that the tri-colours offered more opportunities, he crossed to the Western Oval in 1966 and straight away assumed the role of the Bulldogs’ full-back for the next four seasons. Reilly played 55 games and booted a single goal with the Bulldogs from 1966 to 1969.

Then in 1970, Reilly’s career reached its peak when he returned home to South Fremantle and made himself an instant Bulldog hero. Souths had finished dead last on the WAFL ladder in 1969, although their coach; former Melbourne star ‘Hassa’ Mann, had set his seal on the club and was busy implementing his style of play. When Reilly took over at full-back, and former Collingwood defender Len Clark settled into centre half-back, Mann’s game plan clicked into place and South Fremantle claimed a fairy tale last-to-first Premiership with a comfortable Grand Final victory over Perth.