The season got off to a bad start for the Blues, losing by 39 points to Geelong at Princes Park.

This game is remembered for the debut of Geelong's champion WA ruckman Graham 'Polly' Farmer. In the first five minutes of the match, he wrecked a knee after landing awkwardly from a boundary throw-in, but stayed on the field, went to a forward pocket, and kicked four goals in Geelong's big victory. Afterward, he underwent a full knee reconstruction, then returned to the game to begin a decade of rivalry with Carlton's John Nicholls for the title of the game's greatest ruckman.

Carlton were dominating the ruck contests despite not having John Nicholls available. However ruck man Graham Donaldson twisted his knee just after half time and was replaced by John Reilly. Fellow ruck man Maurie Sankey copped his fair share of treatment from the Cats receiving a broken nose, cut eye as well as internal bruising and the Blues were reduced to having Serge Silvagni as the go-to ruck man.

Geelong barrackers who flocked to the Carlton ground were thrilled with the performance of 'recruit' ruckman "Polly" Farmer. He showed all the attributes of the champion he is and capped off a fine debut with four goals. Fred Wooller, Bill Goggin, Terry Callan and Eric Nicholls were others to shine. Blues skipper Graham Donaldson, was showing all his old skill and having a great battle with Farmer until injured in the third term. Serge Silvagni started the season in fine style and battled strongly. Tom Carroll kicked four goals, as did Peter Falconer, Carlton's new rover from Geelong. - Football Record. 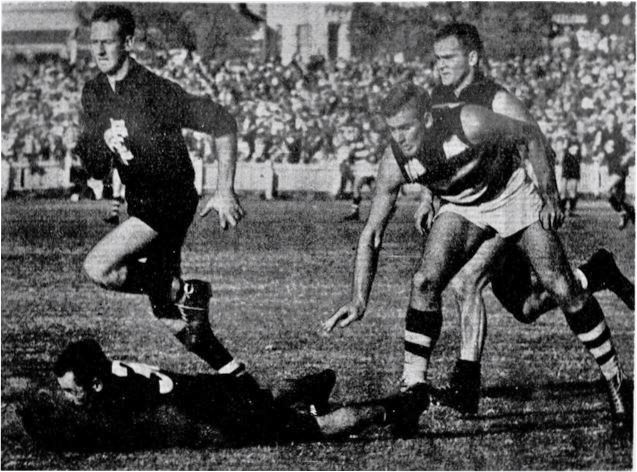 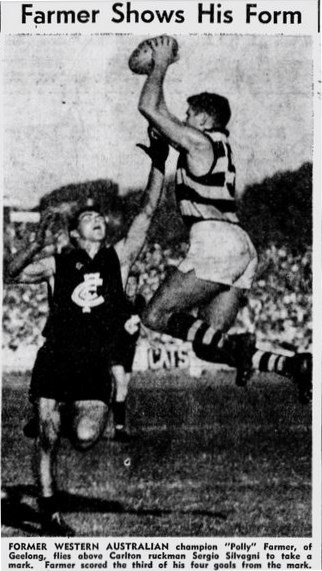