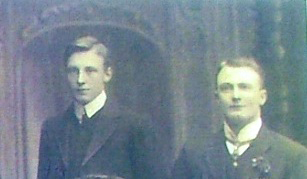 NB Harry is on the left in this image of the Curtis brothers.

In a story that still rankles with every telling, Harry Curtis was discarded by Carlton after he had played only two senior games in 1913. Club folklore has it that Carlton’s coach at the time, Jack Wells, told Curtis that he would never make a League footballer because his kicking skills were so poor. But Harry didn’t agree, and crossed to Collingwood – where he played another 122 games and kicked 149 goals in a stellar career that included three Grand Finals, and Premiership victories in 1917 and 1919.

After retiring as a player, Curtis was elected President of Collingwood at the tender age of 32. From then on, he served for an unbroken period of 27 years, during which the Magpies won another six flags – including four in succession from 1927 to 1930.

Born in Carlton in 1892, Harry was one of ten children in the family of John Curtis, a successful leathergoods manufacturer, and the proprietor of a dancing school in Canning Street. Like his older brother Charlie, Harry was a keen footballer from his early years, and represented both Carlton College and Wesley Collegians as he completed his education. In 1898, Harry wasn’t yet six years old when Charlie began his 22-game career at Carlton, so it was only right and proper that Harry should have followed suit and joined the Navy Blues when he decided to have a crack at VFL football fifteen years later.

A tall, wiry ruckman-forward, Curtis played his first senior game against University in round 14, 1913 at Princes Park, and his second at the same venue a fortnight later against Richmond. Despite his coach’s misgivings, Harry launched at least one of his kicks straight and true that afternoon, because he brought up his first career goal in 12-point victory over the Tigers.

Six months later, Curtis was at Collingwood, where he soon emerged as one of the best centre half-forwards of his era. He formed a formidable partnership with champion full-forward Dick Lee, and was named among the Magpies’ best contributors in both the 1917 and 1919 Grand Finals. Still playing good football when he retired in 1923 because of his blossoming business interests, he was elected President the following year.

Curtis passed away on the 31st March, 1968, aged 76. After his death, he was inducted into the Hall of Fame at both the AFL and Collingwood.

Articles: Carlton and the Brothers Curtis | The Fish that Got Away