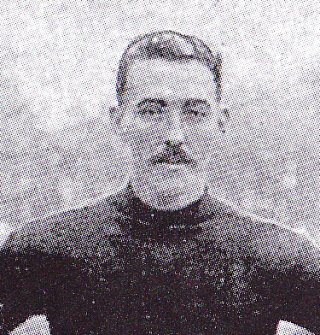 Frank ‘Silver’ Caine was a spectacular, long-kicking forward for the Blues in the first decade of last century. Personally recruited by Carlton’s legendary first coach Jack Worrall, he became a star in Carlton’s 1906 and ‘07 Premiership teams, and would certainly have completed the hat-trick had he not been injured mid-way through 1908.

When Worrall was controversially sacked in 1910, Caine was one of four senior Blues who immediately walked out in protest. He joined North Melbourne in the VFA, and won another flag (as well as the Association’s top goal-kicking award) that same year. Later, he was reunited with Worrall at Essendon, where they combined for yet another Premiership when the Same Old proved too good for South Melbourne in the 1912 decider.

Almost eight years earlier, Caine had been playing amateur football for Rose of Northcote when Jack Worrall first approached him. In his third season as full-time secretary-coach of the Carlton Football Club, Worrall was continuing his search for new talent, and liked what he saw in the flamboyant Caine. Frank became a Carlton player in 1905 and made his debut against St Kilda in round 7 at the Junction Oval. From then on he was an automatic selection in the senior side, as his booming place kicks and soaring high marks made him an instant sensation.

In an era of low scoring, Caine banged through 25 goals to be Carlton’s leading goal-kicker in his first year. Under Worrall’s authoritarian rule, the Blues had gelled into an ominous combination at last, and made it all the way to the Grand Final, only to be handed a reality check by the season’s pace-setters, Fitzroy. But within twelve months, the Blues turned the tables when they crushed the Maroons by 49 points in the 1906 Grand Final to claim Carlton’s first-ever VFL flag. Playing on a half-forward flank that day, Caine kicked three goals in a solid performance, including one monster roost that was later measured at 75 metres.

Carlton’s second Premiership in 1907 came after another couple of remarkable achievements by Caine. By then nicknamed ‘Silver’ because of his prematurely-greying hair, he kicked a record eight goals in Carlton’s 78-point demolition of Fitzroy at the Brunswick Street Oval in July, and headed Carlton’s goal-kicking list again with 32 majors, while the Blues claimed back to back flags with a courageous 5-point Grand Final victory over South Melbourne.

Just over a year after his big day at Brunswick Street, Caine returned to the scene of his triumph, at the top of his form in a Carlton side that was sitting pretty on top of the ladder. That was until the second quarter, when he was carried of the ground with a serious leg injury. He didn’t play again all season, while the Blues audaciously battled through to a third straight Grand Final, and beat Essendon by nine points in a dour struggle on a wet and windy MCG.

After that unprecedented achievement - the first-ever hat-trick of VFL Premierships - logic would conclude that Jack Worrall would be secure in the role of Carlton coach – but this was not the case. Discontent among a faction in the playing group – led by strong-willed defender Norman Clark – burst into the open in 1909 and set in train a series of unfortunate episodes that culminated in Worrall’s resignation as coach, although he did stay on as club secretary.

Despite those distractions, the Blues still finished second on the ladder under captain-coach Fred ‘Pompey’ Elliott in ’09, and in September, went within a whisker of winning four flags in a row. In a clinker of a Grand Final, South Melbourne edged out Carlton by just two points. Back to near his best, Caine was prominent throughout the final series, highlighted by his four goals from half-forward in the Preliminary Final.

Ignoring the Blues’ mighty effort of contesting four consecutive Grand Finals, the anti-Worrall dissidents persisted in their endeavours. They forced a spill of all committee places at Carlton’s 1910 Annual General Meeting, held prior to the new football season in April. By then Worrall could see the writing on the wall, and resigned to bring a swift end to an unhappy episode. Afterwards, many people, including most newspapers of the day, were critical of the shabby treatment handed out to Worrall, as were four of the Blues’ most revered players; ‘Mallee’ Johnson, Fred Jinks, Charlie Hammond and ‘Silver’ Caine. All of them were in the prime of their careers, yet were determined to leave Carlton and link up with North Melbourne in the VFA.

Carlton’s loss was certainly the Shinboner’s gain. Boosted by four of the greats of their time, North dominated the Association in 1910 and easily accounted for Brunswick in the Premiership decider. Caine was one of the stars of the competition all year, booting 75 goals to win the overall goal-kicking award, and starring at centre half-forward in the Grand Final.

‘Silver’ spent another two years at Arden Street. Then he answered a plea from his former mentor Jack Worrall, who had taken the reins at Essendon after leaving Carlton, and carried on his phenomenal success rate by coaching the Same Old to the 1911 VFL Premiership. Worrall’s new team needed some extra firepower up forward, and Caine was happy to provide it. He slotted straight into centre half-forward at Essendon, and won the ultimate football prize for a third time when the red and black upset South Melbourne by 14 points in a dour 1912 Grand Final.

Frank played on at Essendon until 1914, although injury again restricted him to 22 games and 33 goals before his eventual retirement on the eve of World War 1. In a sad postscript to a brilliant career, he passed away at the age of just 48 in 1930.

Frank Caine gives his reasons for leaving Carlton in an interview with The Argus in April 1910.
To read click here> http://nla.gov.au/nla.news-article10852944

The Age of September 6, 1930 (p12) mentions the will of Francis Albert Caine was contested by his mother.
The report says he was the hotel keeper of the Town Hall Hotel, Bank Street, South Melbourne.