The Blues rack up a win at last - by six goals over Richmond at VFL Park. 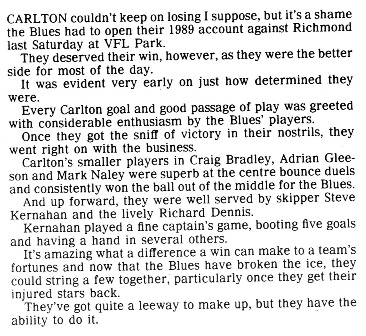 Blues Back
Carlton's nightmare start to the season may turn out to be a blessing in disguise for the proud club. Five succesive defeats rocked the Blues and their critics had a field day. Saturday's ice-breaking victory over Richmond, however, could be a sign of things to come. Carlton was extremely committed on Saturday and skipper Stephen Kernahan made the point after the game that morale at the club had been fantastic despite the on-field woes. In fact, Kernahan said the unity had been better than at anytime during his stint at Princes Park - including the 1987 premiership year. Any complacency that might have crept into the place, would have been well and truly swept away in that dreadful opening month of the season. Carlton had several key players back in action in the twos last Saturday and expects to regain the services of quite a few others in the coming weeks. If the Blues can display the same attitude they showed against Richmond, then they will soon recover lost ground. - Tony Greenberg Inside Football.