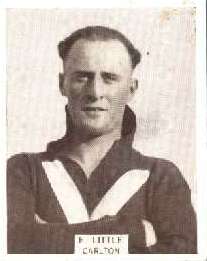 The pinnacle of Eric Little’s career at Carlton came in his first three games. After making his senior debut against St Kilda in the last round of the 1931 season, his second match was a record-breaking Semi Final victory over Collingwood, followed by a narrow loss to eventual Premiers Geelong in the Preliminary Final. Although he did make one more September appearance for the Navy Blues in 1932, the second half of his four-year career at Carlton proved far less rewarding than his first.

Little came to Princes Park from VFA front-runners Coburg early in 1931, and spent most of his initial season playing in the centre for Carlton Reserves. A creative type with the ability to bring those around him into the game, he was selected in the senior side at last when the Blues met St Kilda in a vital round 18 home match at Princes Park. Needing a victory to guarantee a finals berth, Carlton were pushed hard all day by the Saints, before eventually pulling away to win by 18 points. Little played on a wing (alongside his acting captain Colin Martyn) and in the last term, capped off a good game by slipping forward to snap through his first career goal.

That effort clinched Eric a place in Carlton’s Semi Final team to meet Collingwood, and guaranteed him an afternoon that he would never forget. In front of a packed house at the MCG, Carlton blitzed their fiercest rivals after half time, and romped away to a club record win by 88 points. Champion full-forward ‘Soapy’ Vallence was unstoppable up forward as he booted 11 goals, while Little, Martyn, and Joe Kelly held sway across the centre.

Buoyed and confident, Carlton then met Geelong in a remarkable Preliminary Final the following week. With a strong breeze blowing straight down the ground, the Blues won the toss and scored seven of their eleven goals in the first quarter. Geelong struck back with eight majors of their own in the second term, then the wind eased at half-time and the match became an arm-wrestle that eventually went to Geelong by six points when their key forward Jack Collins kicked a long pressure goal with only a minute or so remaining.

Little seemed to cement his place in the Carlton seniors in his second year, playing on the wing, or providing an adequate alternative in the centre whenever Martyn was injured or unavailable. He wore his number 28 guernsey onto the field in 13 matches during the home and away season, but was then omitted from the team after Richmond thumped the Blues by four goals in the 1932 second Semi Final.

Eric’s place in the side for the subsequent Preliminary Final against Collingwood was taken by Leo Opray; an ex-Oakleigh speedster who had been starring in the Reserves. Opray was a sensation in his debut for the Blues, as Carlton surged to another huge win - this time, by 75 points - over the Magpies. ‘Soapy’ Vallence kicked another magnificent bag of 11 goals, with Opray’s dynamic performance on the wing providing a main source of supply.

Opray’s impressive debut slammed the door on any slim hope that Little may have had of a recall to the team for the Premiership decider against Richmond, and Eric could only watch on in despair the following week as the Tigers maintained their mastery of the Blues with a gritty 9-point Grand Final win. Vallence kicked another five goals for Carlton, and Martyn and Opray couldn’t be subdued, but an even and committed Tiger outfit came out on top in a desperate finish.

Although Opray only stayed at Carlton for one more season, his presence during 1933 restricted Little to just five matches. So when Eric was left out of the team that lost that year’s first Semi Final to Geelong, he must have decided that perhaps it was time to look for opportunities somewhere else. His last game for Carlton came against Fitzroy at the Brunswick Street Oval in round 5, 1934, when he played in the centre in a hard-fought 15-point loss. In 1935, Little joined St Kilda, and extended his VFL career by another 14 games as the Saints made a rare tilt a place in the finals, but fell one win short.

In 1936, after 39 VFL games, Eric was appointed captain-coach of Bendigo Football League club Kyneton, and became an instant celebrity throughout the district when he took the Tigers to a Premiership in his first season. Two years later, he resigned from his role at Kyneton and was one of 23 applicants for the vacant coach’s job at the Dimboola Football Club in the Wimmera Football League. (As Australia slowly recovered from the lingering effects of the Great Depression, football coaching jobs were lucrative and highly prized.)

Meanwhile, Eric had recently married. He was living in Rathdowne Street in Carlton when he was appointed coach of Dimboola, and had hardly settled into his new surroundings when it became painfully clear that Australia and the entire British Empire was on the brink of war with Germany. In November 1938, Eric enlisted in the Australian Military Forces. He served with the Militia until 1942, then transferred to the RAAF and saw out the war as an aircraft mechanic.

Safely home at the end of hostilities in 1945, he settled back into civilian life again, until his passing at the age of 88 in April, 1999.

The Horsham Times, 22 March 1938
"At a committee meeting of the Dimboola Football Club, Eric Little, now of North Carlton was appointed from 23 applicants to the position of playing coach. The salary is £6 per week, with the addition of lodgings. He played with St.Kilda and Carlton in the Melbourne League and his age is 27 years. For the last two years he coached Kyneton in the Bendigo league and coached that team to the premiership the 1936 season. He played centre for Carlton and on the wing with St.Kilda. He is 5ft 8in and weighs 12 stone."