Turner was a 194cm, 94 kilo recruit from South Australia who was on the Carlton playing list from 1995 to 1996. Despite his impressive size and good turn of speed, he only played 2 games for Carlton in 1996. Turner played mainly as a key defender, but occasionally as a tagging ruckmen if there was a big guy turning it on against the Blues.

Three weeks after being dropped back to the Reserves after his 2 senior games, he had a brain fade against Footscray & punched his bulldog opponent fair in the face in front of two field umpires & a boundary umpire. He received a four week suspension & needless to say his career with Carlton was immediately over.

Unfortunately for Turner, the one thing that I will always remember about him was an error he made in a reserves game at the MCG - back when the game featured 2 games a day. Turner, playing Full Back at the time, took a kick-in after the opposition had hit the point post on the full. He sat back, ran in to take his kick - and hit the point post on the full with his kick! Recognising that there didn't appear to be a law for this sort of error, the umpire gave Turner another chance.

Turner was originally from North Adelaide, he played there from 1990 to 1994. 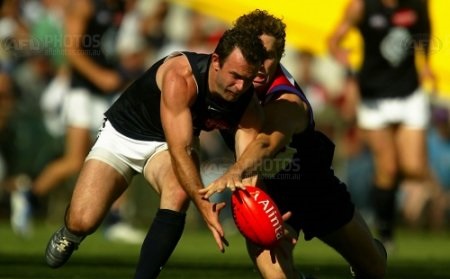