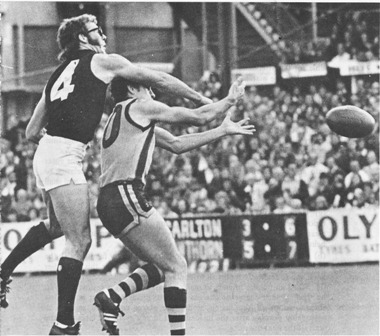 
One of the very few VFL footballers to take to the field wearing spectacles, Robert Anthony (Tony) Southcombe played more than 300 games of club and representative football, including 13 consecutive matches with Carlton between April and June 1977. Nicknamed ‘Bluey’ because of his bright red hair, he was an outstanding ruckman-forward and exceptional leader who didn’t make his VFL debut until the age of 26 - only to terminate his career early because of business and family commitments in his home town of Bendigo. Resuming with his original club; Golden Square, he was conspicuously successful with a number of teams over the following decade, eventually taking his tally of Premierships to a remarkable 11 - along with a swag of individual honours as a player and player-coach.

Southcombe spent his entire career handicapped by prescription glasses that were frequently broken or lost in the crushes. But skilled with hand and foot, and physically imposing, Bluey was a star in the Bendigo Football League from his teens, winning the competition’s Best and Fairest award, the Michelson Medal, with Golden Square in 1972 and 1975. Unable to wear contact lenses, he brought numerous pairs of specs to each game, and made sure that his team’s trainers and runners always had replacements on hand.

With Southcombe in the ruck or at centre half-forward, Golden Square won BFL flags in 1972 and 1975-76. Prior to "The Bulldogs’ 1975 Grand Final, they were given a mighty scare two hours before the first bounce of the big game when captain-coach Tony Southcombe and key players John Kaladis and Neil Cordy were involved in a two-car collision. Their car was a write-off, but the star trio escaped injury and made it to the ground in time to play. After trailing at quarter-time, the Bulldogs kicked six goals to none in the second term to open up a four-goal lead. The Dragons, coached by Ron Best, battled gallantly in the second half, but Square held on to win by 11 points. Centre half-forward Peter Hinck was best on ground, while Southcombe and Kaladis shook off the effects of the car crash to kick five goals between them. After that, the big bloke gave in to the constant urgings of Carlton’s recruiting team, and agreed to join the Blues for the following season. At that time, the Bendigo district was Carlton’s allocated recruiting zone, and it had already produced a bevy of ready-made stars for the Blues including Geoff Southby, Rod Ashman, Trevor Keogh and Des English.

Carlton coach Ian Thorogood handed Southcombe guernsey number 4, and a place in the senior team that travelled to Kardinia Park to play Geelong in the opening round of 1977. Stationed on a half-forward flank alongside the Blues’ new captain Robert Walls, Bluey kicked his first career goal early on, and celebrated the perfect start with his new club as the rampant Carlton combination smashed the Cats by 78 points to set a new record winning margin over one of the previous year’s finalists.

Over the next 12 weeks, Southcombe filled a variety of roles as a relief ruckman or key forward, highlighted by his Best on Ground effort against Melbourne at the MCG in round 7. First choice ruckman Peter Jones was injured early in that game, so Bluey stepped up to dominate the hit-outs, and steered the Blues to an impressive 20-point win. He was lauded as a potential recruit of the year after that effort, but his career was destined to last just six more weeks.

From the start, Southcombe had refused to set up a home in Melbourne, insisting on travelling from Bendigo to Melbourne numerous times each week for training and matches. An auctioneer by trade, he found it more and more difficult to cope with the incessant travel as the season progressed, and in late June decided that his time as a VFL player was up. Although deeply disappointed, the Blues let him go, sending him off with a forgettable loss to Fitzroy at the Junction Oval on a miserably cold and wet Saturday afternoon in round 13.

Back at Golden Square, Southcombe was appointed captain-coach, and commenced a dream run of Premierships by leading the Bulldogs to another BFL flag in 1979. Two years later he took a “Foreign Legion” of promising BFL youngsters to Boort in the North Central Football League, where he won the competition Best and Fairest in his first year, then led the Magpies to an emphatic upset Grand Final victory over Wycheproof-Narraport in 1982.

But perhaps his greatest achievement began in 1981, when he returned to the BFL to take on the daunting task as captain-coach of the fledgling Northern United (The Swallows). Once again, he put together an imposing team of friends and former foes, including ex-Blue Gavin Exell, and prolific full-forward Ron Best. Under Southcombe’s leadership, the team quickly gelled into a super combination, winning triple BFL Premierships in 1984-85-86, and a fourth in 1987. By that time, Bluey had relinquished his coaching duties, been inducted into the BFL Hall of Fame, and was enjoying the twilight of his career on the field.

After retiring as a player, Southcombe continued in various coaching roles. He was in charge of the Bendigo Pioneers in their first year in the TAC Cup Under-18 competition in 1993, and in 2007 he picked up yet another Premiership when his Elmore Bloods defeated Colbinabbin in the Grand Final of the Heathcote District Football League.

Bendigo All Stars Team (1972-1997).
In 1997 the Bendigo FL compiled their best team for players originating from the BFL VCFL zones for the period from 1972 - 1997, Southcombe was named on the interchange in that team.

1984 Bendigo FL: Semi Finals
NORTHERN United and Eaglehawk scored massive wins in the second week of the BFL finals in September, 1984. In fact, so comfortable was the Swallows' second semi-final victory over Sandhurst they firmed to red-hot flag favoritism. And Eaglehawk crushed a placid South Bendigo in the Saturday first semi-final to book a berth in the preliminary final 30 years back. In my back page lead story of September 10th '84 I wrote United had swept aside a lacklustre Sandhurst outfit to grab a grand final spot. "The Swallows turned in an even performance with a number of players top contributors to the team effort. They completely swamped the haphazard Dragons. "The Hurst had no one up forward apart from David Collins who could kick goals --- and at three-quarter time the Dragons had posted only five, anyway." At the opposite end of the QEO United had Ron Best as their focal point and he booted 6.7 for the day. Northern United proved without doubt it had the players, the motivation, the will-to-win and that vital commodity on the QEO: the pace to win. Gate takings were a very handy $3267 (not counting 258 family tickets). There were surprises before the ball was bounced. United captain-coach Tony Southcombe did not play, while John McGrath was one of the two United interchange players.The Dragons were without Phil Pickering (groin) and Paul Johnston (ill). Noel Belsar, generally considered a doubtful starter, took his place in the Hurst 20 once it was known Pickering was a late 'out'. UNITED did all the early attacking but took until the 10-minute mark of the first term to score a major. Scott Niemann found Best for the Swallows' first but Tim Ledwidge replied with a left-foot snap for the Hurst. Two goals each to United's Garry Mountjoy and Best and also to Collins left the Swallows three goals clear at the first break. David Muir blanketed Frank Coghlan although Dragon follower Bernie Sloan took full toll of Southcombe's absence with great around-the-ground marking. Two more goals to Collins narrowed the margin to three points mid-second stanza. Southcombe switched David Ludeman to centre half-back and Trevor Ludeman to centre half-forward. Swallows' majors to Mick Hogan and Leon Holt blew out United's lead and when Dragon midfielder Mark McErvale was pinged for holding the ball Best drove home an after-the-siren major to hand Northern United a 21-point half-time lead. Peter Fyffe had been the sticking point for the Dragons. His anticipation across the United defence broke up many Hurst attacks and he mopped up across the full-back line repeatedly. United really claimed their grand final spot with a withering third term burst of 7.6. Fyffe, Muir and Demeo restricted Sandhurst to a miserable three points in the third quarter as the Swallows took an unassailable 68-point lead into the final change. Of the Swallows' seven majors Muir's was the pick. He hammered home a glorious long shot but Brett Sheldon, Trevor Ludeman, Scott Niemann and Mountjoy all joined in the goal-kicking spree. The Dragons did add some respectability to their scoreline in the last term, posting 7.5 to United's 3.5. Although the Swallows had many fine players, full-back Fyffe was the standout. He came out to meet the ball when that move was needed, continually punched the ball clear in marking contests and swept the ball away from the goalmouth with sureness and aplomb.
Second semi-final
Northern United 6.4 9.6 16.14 19.19 (133)
Sandhurst 3.4 5.9 5.12 12.17 (89)
Goals – Northern United: R. Best 6, G. Mountjoy 3, B. Sheldon 2, L. Holt, M. Hogan, D. Trickey, D. Muir, J. McGrath, T. Ludeman, S. Niemann, R. Lea. Sandhurst: D. Collins 6, T. Ledwidge 3, R. Blackmore, L. Moore, I. Garland.
Best – Northern United: P. Fyffe, L. Demeo, B. Sheldon, G. Mountjoy, D. Wharton, R. Best, S. Niemann, G. Evans. Sandhurst: B. Sloan (best on ground), D. Collins, M. O'Farrell, N. Belsar, D. O'Connor.
Umpires: M. Anderson, M. Furness. The Football Almanac; Richard Jones.

EAGLEHAWK bounced back from a five-goal loss to the Hurst in the first week of the 1984 finals with an 11-goal thumping of South. Just as importantly the Two Blues had important players in key defender Robert "Ninga" O'Connell and versatile Peter "Roggo" Rogerson play important roles in the win. Both had recovered from injuries to take their places in the Hawks line-up. Early on the Bloods led by three points at half-time in a low-scoring and tight first semi-final and then by a point 10 minutes into the third term. The Bloods had pegged back a three-goal deficit to snatch that one-point lead. Malcolm Balnaves (2) and Terry Noden nailed South majors with Balnaves left unmarked in a pocket to mark and goal for the first of a pair. But then the flood gates opened. Eaglehawk nailed seven majors as the third term wound down to give them 10 for the quarter. Interchange player Ron Pangrazio had come on for his first run as the third term started and bagged three goals for the game, including one after the three-quarter time siren. Skipper Rogerson put on a virtuoso performance mid-term as Eaglehawk stormed to the lead. He left-footed a fine 40m snapped goal and soon after took a pass from Dan Slater to boot a right foot set shot. With two goals each from spearhead Daryl Gilmore and Slater and another from on-baller Steve McDougall (who changed with Rogerson on the ball) Eaglehawk was out to a big lead. O'Connell was too big and too experienced for Shane Ryan. The Eaglehawk defence featuring Bert McIvor, Andrew McDougall and Tony Pierce shut down South's attack, although Brett Moore was busy, as three-quarter time approached. At the last change the Two Blues led by more than six goals, and added another seven in a devastating last quarter. Amazingly, the two clubs had drawn in the final home-and-away round of 1984. That amazing draw had cost South the finals' double chance. By Richard Jones.
Details: First semi-final
Eaglehawk 3.3 5.7 15.13 22.15 (147)
South Bendigo 3.5 5.10 9.11 11.13 (79)
Goals – Eaglehawk: D. Gilmore 4, P. Rogerson 4, R. Pangrazio 3, D. Slater 2, G. Christie 2, A. Evely 2, S. McDougall 2, R. Cartledge 2, N. Monro. South Bendigo: M. Balnaves 3, P. Boyd 2, D. Charles 2, T. Noden 2, P. McCaw, W. Hoiles.
Best – Eaglehawk: R. O'Connell (best on ground), A. Evely, P. Rogerson, S. McDougall, B. Keane, S. Dole, J. Fehring, D. Gilmore, D. Slater. South Bendigo: M. Balnaves, B. Moore, G. Wright, M. Graham, W. Hoiles, T. Noden.
Umpires: J. Fletcher, Ron Threlfall. The Football Almanac; Richard Jones.