Melbourne beat Carlton by 6 points at the MCG, in a game notable for Brent Heaver's 5 goals on debut for the Demons.

Played before 60,000 at the MCG on a Sunday afternoon, this was an enthralling, close-fought match - narrowly won by Melbourne, but perhaps better remembered for the debut of a young Brent Heaver. In his first and only game against Carlton in Melbourne colours, Heaver kicked five goals, as the Demons withstood a second-half revival by their visitors, and hung on to win by a kick. Later dumped by Melbourne after only a dozen games, Heaver was picked up by the Blues in 1992 and contributed 106 goals in 64 matches for Carlton over five seasons.

Another debutant to impact the scoreboard for the Demons in this game was Rod Keogh (2 goals). Rod's uncle, Blues legend Trevor Keogh, was Carlton's runner at the time! I wonder if Trevor had mixed feelings about seeing his nephew do well from such close proximity.

Meanwhile, Blues captain Stephen Kernahan and busy rover Mark Naley also booted five goals each, adding to the puzzle of how their team was beaten. Melbourne led by 31 points at the long break, but the Blues lifted in the third quarter and nearly pinched the match, booting 8.11 to 5.4 in the second half to fall short by 6 points. Kernahan took seven strong marks in a dominant last term, before a couple of wayward kicks for goal proved crucial.

As well as Carlton's sixth loss of the season, this was the Blues' 101st defeat in 200 games at the MCG. Again, it was costly - dropping the team to ninth place on the ladder and two wins out of the top five. 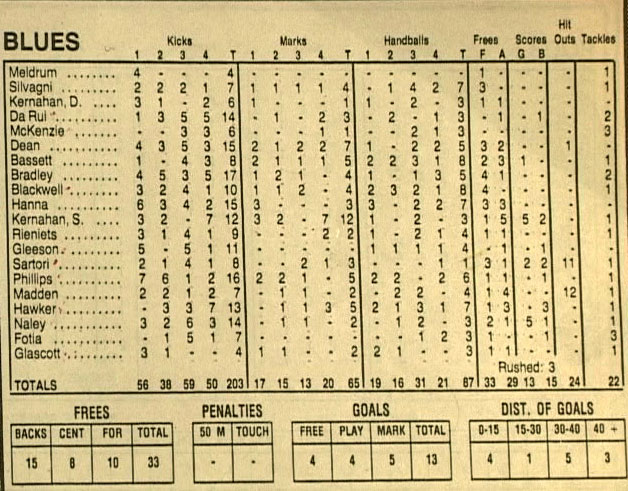