'An acrobat in football boots...' 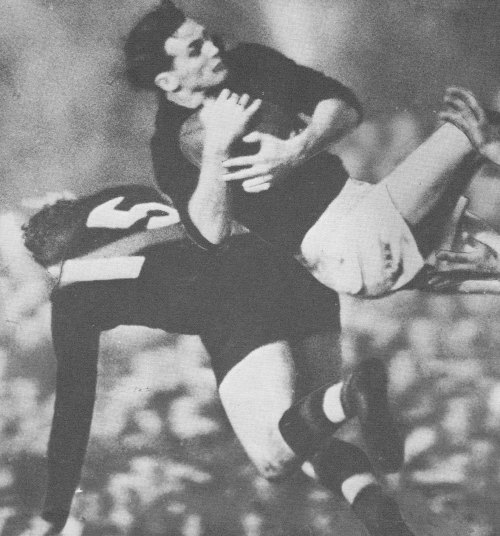 Early in his career at Carlton, one Melbourne newspaper described Keith Warburton as ‘an acrobat in football boots,’ when his spectacular high marking made him an instant crowd favourite at Princes Park. He enjoyed a meteoric start to his VFL career with the Blues, until he was seriously injured in his first and only finals match in 1952. Although he recovered and played on for another three seasons, he never quite scaled the heights of his first two years.

Warburton began making football headlines in 1948, as a dasher for Brighton in the VFA. He starred in the centre when the Penguins beat Williamstown for the 1948 flag, and the following year, kicked 101 goals when he was shifted to full-forward. Although he was just 178 cm and 79 kg, Keith had superb judgement, vice-like hands and a huge leap. His trademark was to fly for the ball from anywhere and from any angle, pulling down ‘screamers’ week after week.

Warburton joined Carlton in 1951 and played his first senior match in guernsey number 7 against Hawthorn in the opening round of the season. At full-forward, he thrilled supporters of both sides with his aerial skills, and steered through seven goals – most of them with long, accurate drop-kicks off either foot. The Blues won by 30 points, and Warburton was a unanimous choice as Best on Ground.

Keith kicked five goals (or more) on four occasions in his first season, although overall it was a poor year for the club. His tally of 48 majors won him Carlton’s leading goal-kicker and best first-year player awards, while Carlton wound up seventh on the 12-team ladder. But Warburton’s emergence, alongside other exciting recruits like Bruce Comben and Laurie Kerr, had given every Blues supporter renewed faith in the future.

Sure enough, the Blues improved markedly as a combination in 1952, when coach Percy Bentley began releasing Warburton from his strictly goal-kicking role, and alternating him through the centre or half-forward. He seemed to relish his freedom up the ground, and his form was so consistently good that he was selected in the Victorian state team mid-year.

Sent forward again late in the season, he tuned up for September with a 6-goal haul against Collingwood in round 17, and was named at full-forward for the Semi Final against Fitzroy. Early in that fateful game (which somehow went to Fitzroy by one point, despite Carlton having nine more scoring shots) Warburton was struck a fearful blow in the abdomen. Perhaps it was an elbow, maybe a knee, but it pole-axed Keith and he took some time to recover. He played out the match, and seemed to be okay – until he suddenly collapsed at the club’s post-match function that night, and was rushed to hospital.

For the next few days, Keith hovered near death with a ruptured kidney and bowel. He needed constant blood transfusions, so Carlton players, staff, and many supporters rallied around to help. He eventually pulled through, although problems did persist and he was forced to have a kidney removed when his playing days were over.

Remarkably, Keith returned to the field in 1953. Percy Bentley was often reluctant to play him out of the goal square from then on, but Warburton continued to be a valuable, consistent member of the team in the centre or a flank. Although hampered by a knee injury and another alarming knock to his lower back, Keith played another 38 matches and booted 24 goals between 1953 and ’55, before retiring after a loss to Richmond at the Punt Road Oval in round 11, 1955.

When he left Princes Park, Keith took on the role of captain-coach at Tatura for the 1956 season. He finished runner-up in the Goulburn Valley Football League Best and Fairest award in 1957, and 14 years later, watched proudly as his son Peter played the first of his four senior matches for the Old Dark Navy Blues.

In 2018 Keith was inducted into the Goulburn Valley Football League Hall of Fame.

Warburton was still a teenager when he joined Oakleigh in 1946. According to VFA historian Marc Fiddian, Keith was discovered by a local businessman with connections at Oakleigh, who arranged for the youngster to attend the next training session. However, the gentleman concerned was unable to pick up Keith as arranged, so instead he sent the youngster to the ground by taxi, with a letter of introduction to coach Harry Vallence.

Harry was impressed. “An outstanding mark and accurate kick, this lad has the makings of a full-forward, and is likely to be seen in action shortly,” he was quoted as saying. Sure enough, Warburton played his first senior game for Oakleigh at the age of 17 years, 50 days on July 27, 1946, alongside Vallence in a forward pocket.
In his second match for the Baysiders the following week against Prahran, Keith kicked four goals from full-forward, after Vallence realised that Keith needed space, and shifted himself out to half-forward.

"He squirmed in the air behind the soaring six footers and came out with the ball to level the scores...."

Keith booted six goals in a remarkable win against Collingwood, see Round 17, 1952

1952 September 19 Friday
Keith was interviewed from his Prince Henry's Hospital bed for radio 3XY's "Highlights From World of Sport" programme to be broadcast 7.30pm this evening.

Keith signed an agreement with Carlton early in 1955 to indemnify the club against a recurrence of the kidney injury he suffered in a match in 1954.
To read The Argus article click here> http://nla.gov.au/nla.news-article71699749

Appearing next to the above article, Keith claimed that Carlton were holding out on his clearance to Tatura, to lure a player from that club to Carlton.
To read the 1955 story, click here> http://nla.gov.au/nla.news-article71699647