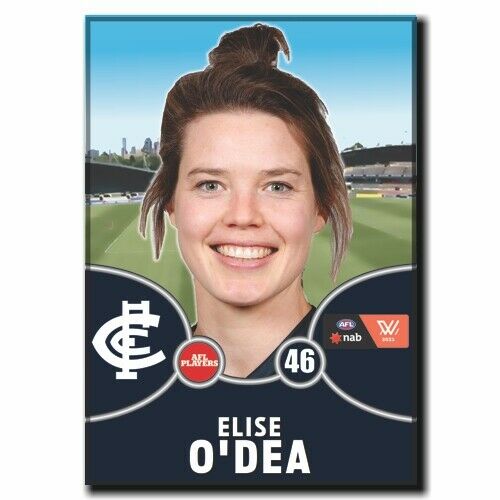 O'Dea was born in Canberra in the Australian Capital Territory (ACT) to a family of Melbourne Football Club supporters and started playing football at fourteen years of age when she joined the Belconnen Magpies Football Club women's team. She made her senior debut in round one of the 2006 season against Ainslie in the AFL Canberra Women's competition. She was selected as part of the ACT representative teams in 2006, 2007, 2009, and 2011. O'Dea was also named part of the 2011 All-Australian women's team, and won both her club and league's best and fairest awards in 2012.

O'Dea moved to Victoria in 2013 to join the Darebin Falcons. Wearing number 30 and playing on the wing and half forward flank, was named as part of the Victorian state teams in 2013 and 2014, and was selected to play for both the Melbourne Football Club and Western Bulldogs as part of a series of women's exhibition games.

In 2016, O'Dea became the first player drafted by the Melbourne Football Club in the first AFLW draft and wore the number five guernsey in her debut season. Prior to the start of the season, she was announced as one of two vice-captains for Melbourne, alongside Melissa Hickey. She made her debut during round 1 of the 2017 season against Brisbane at Casey Fields. In the round four match against Carlton, she collected twenty-seven disposals. At the end of the 2017 season, O'Dea was nominated by her teammates for the AFL Players' Most Valuable Player Award. She was also listed in the 2017 All-Australian team. Melbourne signed O'Dea for the 2018 season during the trade period in May 2017. In December 2018, O'Dea and Shelley Scott were announced as Melbourne co-captains

Prolific midfielder and two-time All-Australian Elise O’Dea made her way to Carlton after a trade was secured with Melbourne. Being the first player to be drafted to the inaugural AFLW Melbourne side, O'Dea played all 28 games, averaging 18 disposals a game. Her maturity and leadership makes O’Dea the perfect addition to what is currently an exciting midfield group, consisting of reigning AFLW MVP Madison Prespakis and last year’s first-round selections Lucy McEvoy and Grace Egan.