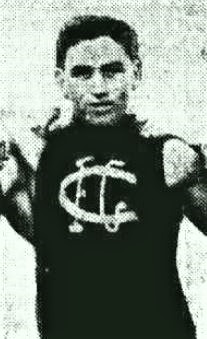 The younger brother of Carlton’s 1921 vice-captain Jack Greenhill, Charlie Greenhill’s brief senior career at Princes Park spanned only a matter of weeks in May and June, 1922. Charlie had come to Princes Park while Jack took a year off football to supervise the operations of the family farm at Corryong in north-eastern Victoria.

Slightly taller and heavier than his brother, Charlie made his debut in a back pocket against Melbourne at Princes Park in round 4, 1922, and celebrated a 32-point victory. He missed the following week, but returned to the side for an 11-point win over St Kilda, and a surprise 10-point loss to Geelong in rounds six and seven. After that, Charlie decided that he was happier in the bush, and said farewell to VFL football.

Although Jack briefly came back to Princes Park in 1923, the brothers never played together at Carlton. They did however, form a powerful nucleus for their hometown team for the rest of the decade. Later, during World War II, they both enlisted in the RAAF and served on home soil as aircraft mechanics. Jack stayed on the land for many years afterward, while Charlie eventually went into business as a builder. He was a keen bushwalker throughout his life, and passed away at the age of 84 in August, 1986.

"J. Greenhill Carlton's brilliant half back who went to the front in 1917, is expected back next month. He has been playing football in France and Belguim, and states that has been showing good form.
His brother was training at the Carlton ground last night. he is only 18 years of age, but shows football promise. He stands about 5ft 11 in. and weighs 12st." (Herald July 18 p3 1919)
Is this Charlie?