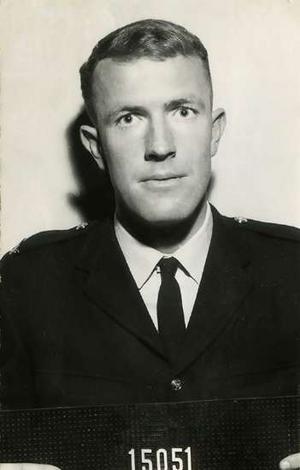 A big, solidly-built ruckman-forward from Kerang, Robert John (Bob) Lane became the first player to wear guernsey number 46 in a senior VFL game for the Navy Blues in round 13, 1966. After that one season at Princes Park, he transferred to the VFA and played in a Premiership side with Williamstown. Ten years after that, in 1979, he became the first and only league footballer to have died representing the Victoria Police, when he was senselessly murdered in the line of duty.

Bob was born into a sporting family of ten children (five boys and five girls) who all shared a love of competition, particularly football and basketball. He was already a big unit by his late teens, when he realised that two of the things that he wanted most in life were to join the Police Force, and to play league football. In November 1965, he achieved the first of those aims when he graduated from the Victorian Police Academy, and some six months later, completed the double when the Carlton Football Club invited him to Princes Park to play on match permits.

It was a time of great optimism and great endeavour for the Navy Blues, under President George Harris and captain-coach Ron Barassi. Lane began with the Carlton Reserves in round 6, 1966 and made the list of best players on debut. Seven weeks later, he was promoted to the senior side as 19th man for the match against St Kilda at Princes Park, but got only the briefest of runs in the last quarter as the Blues won comfortably.

It was a similar situation for Bob in round 14 against Fitzroy. He spent all but the last fifteen minutes on the sidelines, as Carlton accounted for Fitzroy by 27 points at Princes Park, only to be sent back to the Reserves the following week for some much-needed match practice. He was a consistent contributor for the seconds throughout the remainder of the year, without getting another chance at senior level.

Prior to the 1967 season, Lane decided that the intense pressure to perform at VFL level was impacting on his police duties, so he applied for a transfer to Williamstown. Carlton didn’t stand in his way, and over the following three seasons, the big bloke was a popular and very effective contributor for the Seagulls in two VFA Grand Finals – their Division 2 victory over Sunshine in 1969, and their 1970 Division 1 defeat by Prahran. Afterwards, as his police career progressed and he was posted to various districts in country Victoria, he served a number of other clubs, including Lake Boga, and Lalbert in the Mid-Murray Football League.

By July 1979, 32 year-old Detective Senior Constable Lane was happily married and the father of two young daughters when he accompanied a suspected car thief to a campsite at Kyalite, in southern NSW. While Bob was searching a disused bus on the property, the 18-year suspect retrieved a hidden rifle and shot him twice at close range. Bob died instantly, and the murderer fled in the police car, only to be apprehended soon afterwards and eventually sentenced to life imprisonment.