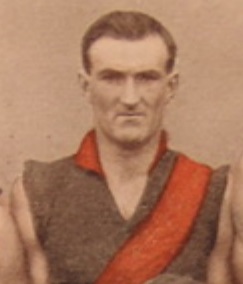 Seasons 1924-'25 were a time of turmoil and little success for the Old Dark Navy Blues. While the VFL expanded into a 12-team competition, the Blueboys finished seventh (of nine teams) and ninth (of twelve teams) respectively. As always however, the club did not passively accept the situation, and churned through no fewer than 31 new senior players and four coaches in a vigorous search for untapped talent.

Among the multitude who first wore the CFC monogram on their chest over that time was Aubrey Charleston; a solidly-built defender recruited from Ulverstone in Tasmania. Wearing guernsey number 27, he played seven games as a defensive flanker in 1924, and then was tried as a forward in his second year. Neither experiment was a real success, so Aub opted to move on after Carlton’s defeat by Collingwood at Victoria Park in Round 8, 1925.

He crossed to Essendon in 1926 and made another nine appearances, but left Windy Hill late the same year. Next stop for Aub was VFA heavyweights Coburg, where he settled in at last, and played a half-back in the Lions' 1926 and '27 Premiership teams.