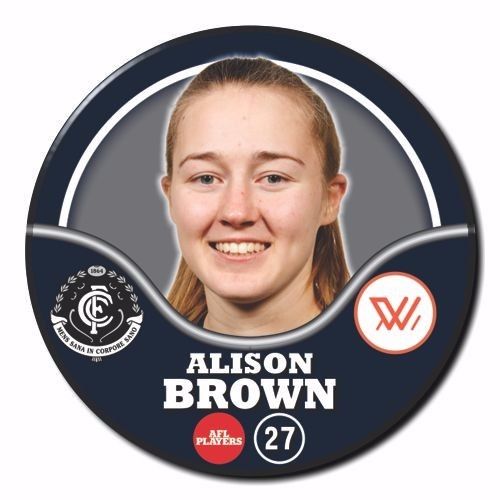 Described by senior women’s coach Damien Keeping as “one of the most promising young guns in the game”, the Club is delighted midfielder Alison Brown will don the navy blue jumper in 2017. The youngster, who joined the Blues as a free agent in 2016, has an elite vertical jump and solid hands, making her a dominant force in marking contests. “Alison’s athleticism means she can work over her opponents from the start of a game until the end,” Keeping said. “She’s a super exciting addition to our team, which will enthuse and thrill our members and supporters.”

Inaugural Carlton player Alison Brown, was not re-signed by the Club at the end of the season during the four-day free agency period, she would spend the next three seasons. Brown was announced as the first AFLW signing for the St Kilda Football Club Women's Team, who will officially enter the AFL Women's competition in 2020. Alison would play another six games with the Saints before being delisted at the end of the 2021 season.

In March 2021, St Kilda announced they delisted Brown after playing 11 matches for the club. In the 2021 AFL Women's draft, Melbourne drafted her with the 45th pick after she played 12 games for Casey Demons in the VFL Women's. Brown is the only AFLW player to be signed to a third club after being delisted from two previous clubs.