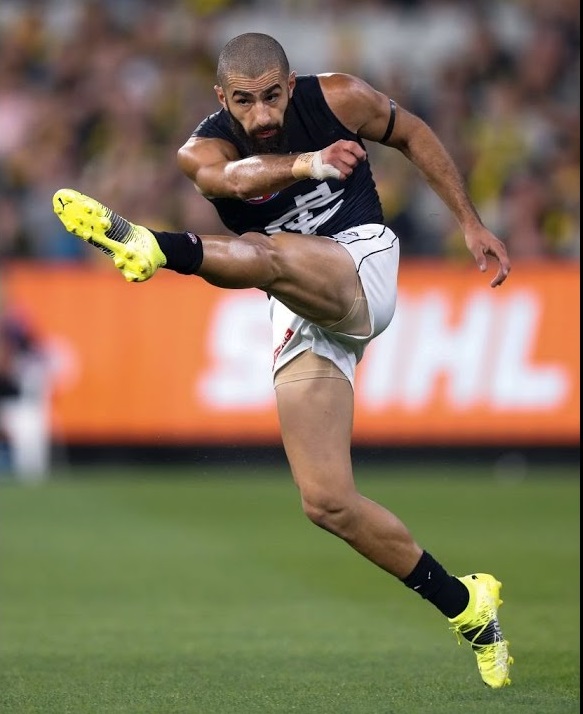 The Carlton Football Club secured the 26-year-old Adam Saad as well as picks No.48 and No.78 in exchange for picks No.8 and No.87 in the 2020 NAB AFL Draft after finalising a trade with Essendon during the 2020 AFL Trade Period. One of the best small defenders in the game, Saad brings an immediate injection of breathtaking speed, elite ball-use and proven defensive brilliance – the perfect fit for Carlton’s attacking, fast ball-movement under Senior Coach David Teague. Another outstanding season of consistency saw Saad finish 2020 inside the top 10 in the competition for metres gained, while going above 80 per cent for disposal efficiency. He also conceded less than a goal against per game, performing lock-down roles on some of the AFL’s most dangerous small forwards in Tom Papley, Liam Ryan and Dan Butler, who were kept to just one goal apiece against him. Saad also arrives at Ikon Park on the back of three consecutive top four finishes in the Bombers’ best and fairest. After missing just one game in his last four seasons, Saad already has 109 games under his belt, bringing valuable experience to the Blues’ back half. Carlton Head of List Management Nick Austin said the Carlton faithful can expect the speedster to bring excitement in the Navy Blue in 2021.

“To have a player and person of Adam’s quality nominate and ultimately join our football club is a great sign of the environment we are building here,” Austin said. “Few in the competition are better to watch when in full flight than Adam and we can’t wait to see his electrifying pace added to our backline which will be really exciting for our members and supporters. “In addition to his attacking qualities, Adam has shown a consistent ability to shut opponents out of the game and it is that flexibility which will really add to our playing list. He is also coming three consecutive top four finishes in the best and fairest, which shows how much he has been valued by his teammates and coaches. “To now have Adam join our football club, in addition to Zac Williams and Lachie Fogarty, sees all three players complement the talent we already have on our list and perfectly aligns with the next step in our list management strategy.”

As a junior he previously played for West Coburg Football Club in the Essendon District Football League. Saad joined Coburg in 2013 following a TAC Cup stint with the Calder Cannons. After appearing to struggle between Senior and Development level football, he established himself as one of the VFL's leading small defenders, winning the Coburg best and fairest award in 2014 sharing in a tie with Daniel Venditti, and was named in the 2014 VFL Team of the Year. His strong form and State Combine testing led him to being drafted to the Gold Coast Suns with pick 25 in the 2015 rookie draft. Saad made his debut for the Gold Coast Football Club in round 1 of the 2015 season and kicked one goal. In round 5, 2015 Saad was nominated for the Rising Star after his team's win over the Brisbane Lions where he had 26 touches. At the conclusion of the 2017 AFL season, Saad requested and was granted a trade to Essendon. Essendon sent their future second round to the Gold Coast. At Essendon he showed his durability by only missing one game in three seasons, he slotted into the backline, he used his pace to full effort and was inventive on moving the ball forward. He finished in 2019 in claiming third place for the club's Crichton Medal.

Saad is one of two practising Muslims currently in the Australian Football League, alongside Bachar Houli.