On this Queen's Birthday holiday Monday, the resurgent Blues caused a huge boilover by knocking over the undefeated ladder-leaders Melbourne by 16 points at Princes Park - despite not kicking a goal in the first term. Thereafter, Carlton's rucks got on top, and a five-goals to two third quarter set up one of our most important wins for the season.
After Melbourne's loss, Essendon remained the only undefeated team. They assumed ladder leadership from the Demons, Geelong and Footscray, with St Kilda and Carlton next.

Carlton had many fine performers in their unexpected win over the Demons. John Nicholls rucked powerfully and his efforts in the third term especially were superb. He dominated the ruck duels. Berkley Cox was a stalwart in the centre. Serge Silvagni gave strong support while rover Peter Falconer was a creative player and made full use of Nicholls' knockouts. Ron Barassi tore into the packs in an endeavour to inspire Melbourne and played a real captain's game. - Football Record. 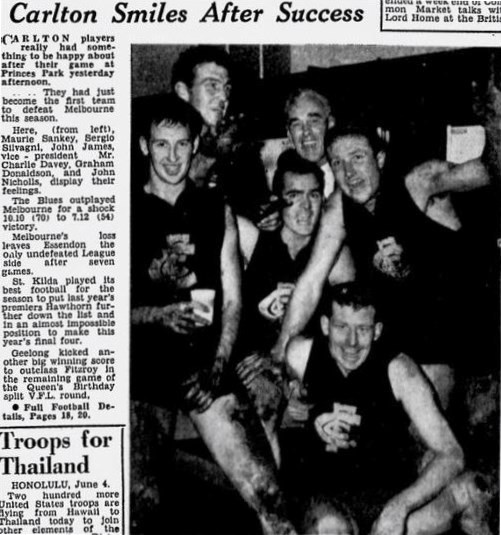