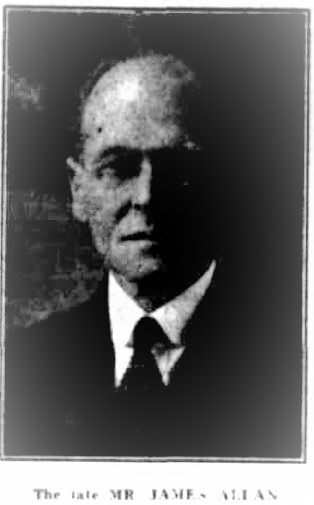 The only information Blueseum has on James is from the newspaper the Albury Banner Wodonga Express and Riverina Stock Journal May 02 1941.
On page 31 the paper has an obituary of James Allan who was a former Mayor of Albury.
The report said; "In his youth he played football, and was one of the earliest members of the Carlton team."
To read his obituary click here> http://nla.gov.au/nla.news-article138904401

"When he came to Albury just on 60 years ago, Mr. Allen's enthusiasm for Australian Rules game, did not wane. He joined the old Federal Club and became one of its prominent players. His skill as a rover was noted and on one or two occasions chosen as a member of interstate teams." (Border Morning Mail April 28 1941 p3)
"Just on 60 years ago," would have been around 1880-81, James would have been in his late teens/early 20's.
Played for Carlton late 1870's -1880?
He may have played for the Carlton Second Twenty of which details are incomplete, or perhaps one of the local Carlton junior teams such as Carlton Imperial, Carlton United, etc.

If any one has any further information on James' career at the Blues, please contact Blueseum ( www.blueseum.org )

Carlton vs South Melbourne in the 1907 VFL Grand Final.jpg