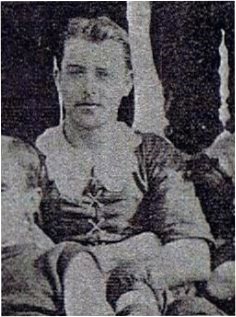 Blueseum does not know his first name.

J. Plummer was a member of the Carlton team of 21 at toured Adelaide in 1884.
They played games against South Adelaide, Adelaide Juniors, Norwood, and Port Adelaide.

1884 May 17
Carlton Second Twenty played South Melbourne at the Lake Oval.
Plummer scored two of the Blues' three goals in their 3.2 - 4.2 loss

1884 June 28
Plummer played in the match in against Norwood in Adelaide.
(The Argus)

Above; J. Plummer appears in the 1884 Carlton Football Club team photo in Adelaide.

1884 Plummer played in first three of the four tour matches played in Adelaide.

1884 July 05
Carlton played Geelong on the M.C.G.
Although not named in the Carlton squad, the Geelong Advertiser in its Monday match report mentions Plummer amongst other Carlton players.

1884 July 12
Carlton played Melbourne on the M.C.G.
A Carlton team squad of 19 was published with Plummer being one of three emergencies.
It is unknown if he took part, as the match reports do not mention the complete starting 20.

1884 July 19
Once again Plummer was named as an emergency for the match against Williamstown on the Gardens Reserve Williamstown.
Only 6 players were mentioned in the match reports.

.*Volume 2 of "The Origins of Australian Football" (M. Pennings, p513) has J. Plummer listed as scoring one goal during the 1884 season.
This is probably June 21 v South Adelaide on the Kensington Oval in Adelaide, where he kicked one of Carlton's five goals.

1884 is the only year Blueseum has found, so far, of J. Plummer's association with Carlton.

1884 October 17 Friday
The Record (Emerald Hill) p3, previewing Saturday's cricket match between Emerald and Clyde lists the Clyde eleven.
Clyde is a local Carlton cricket and football club probably named after the Clyde Hotel in Cardigan Street, The hotel is still in existence in 2017.
There are many Carlton Football Club "names" in the Clyde team;
J. Dunn, M. Nash, H. Hems, E. Fitzgerald, A. Shearwood, W. Heatley (vice capt), A. Elliott, and a J. J. Plummer (captain).
Is J. J. Plummer the same person as J. Plummer of the Carlton Football Club?