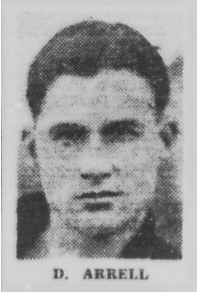 David Henry Arrell played the last four matches of season 1934 for the Blues, after being recruited from our neighbouring VFA side Brunswick.

If guernsey numbers were any indication of a player’s potential in those times, then Carlton thought highly of Arrell - because he wore guernsey number 2 when he warmed the bench in his first senior appearance against Richmond at Princes Park in late August. Coming on late in the game, he kicked his one and only career goal as the Blues went down to the Tigers by 13 points. He then took on a role in the centre for the last three matches of the season, while Carlton wound up fifth on the ladder and missed out on the finals.

Arrell departed from Princes Park after that one season, and had stints at on the lists of Essendon and Brighton until World War II began in 1939. In February 1942, Dave signed on with the Militia (or Army Reserve) and rose to the rank of Lance Corporal while serving on the mainland in an ammunition supply company. He was discharged some eighteen months later, and apparently lived out a peaceful, unobtrusive existence until March 1990, when he passed away at the age of 76.
His service number was V206300

"The following have been selected by The Sporting Globe representatives as the best players in the Association matches on Saturday."
"Dave Arrell was on the losing side at Brunswick but he had no equal in the game in effective work. For three quarters he was the backbone of the defence, turning many attacks with clean marking and driving kicks, while his dash to the ball was exceptional. In the last quarter he was sent to help the attack, which had been ragged, and at once steadied it. Dave is only 19, a local product, and a good footrunner. Carlton were anxious to secure his services this year."
(Sporting Globe May 02 1934)