Carlton gave new coach Percy Rowe the best possible present to start the season – a 70 point thumping of South Melbourne. In perfect conditions the Blues, with their pace, skills and relentless pressure, thoroughly outclassed the disorganised Bloods, increasing their lead at every change.

Tuesday’s training was the last chance to impress the selectors before they chose the final lists for the season. For over an hour, a strenuous match practice session showed some first class skills from all players. Harry Vallence, who missed last week’s training due to injury, was out on the track and looked in great shape. Ron Cooper did not train, following an incident with Jim Francis which reportedly involved blows and ill feeling at last Saturday’s practice match. That incident would be discussed by the committee on Thursday night.

On Thursday night, the committee suspended Cooper at its pleasure for the incident in the practice match and he was absent from training. Several other players were also absent, following the release of the final team lists for the year. Wally Mutimer and Clen Denning trained with Fitzroy after their relegation to the supplementary list and were seeking clearances to that club. Clem Neeson and Harry Hollingshead were the two other relegations. New to the main list were Fred Ayres, Kevin Fox and Paul Schmidt (all promoted from the reserves) and Arch Shields from the Teachers’ College side. Ansell Clarke had been chosen to lead the team for the season, with Jim Francis his deputy. One new face was included in the team announced after the training, with Paul Schmidt named as an emergency.

An interesting event occurred at South Melbourne’s training. Brighton Diggins was seeking a clearance to Carlton and was sensationally left out of their team following an approach by Carlton officials for his clearance, which South refused. Those who know their history will be aware that Diggins would cross to Carlton as captain-coach in 1938.

The beautiful weather and the much anticipated season commencement were no doubt mainly responsible for the bumper crowd of 35,000 spectators. South Melbourne was unsettled by a late withdrawal from their side which caused major reshuffling and Carlton made the most of this, with their early pace impressive. Francis made the first attack, passing to Butler who forwarded to Vallence. His long punt was slightly fumbled as he kicked and only a behind resulted. South responded with a sudden burst, first scoring a behind and then a nice goal after evading the defence. It was a rugged game early, with both sides committing body to packs. South’s defence held off several Carlton forays, before thrusting forward for a behind. Huxtable repelled another attack, then passed to Anderson. He found Shea on the run on the wing, who passed to Crisp for a clever first goal for the Blues. Dunn and Vallence, with a long punt, helped Clarke to score the second goal. Carlton had gained the ascendancy across the centre but at this stage it was an even game, with South’s reshuffled defence doing well. Gill was playing splendidly in defence, but his mistake let the Bloods in for their second goal. Another followed soon after in a good burst of football. Carlton replied after some good work from Francis and Davey brought the ball to Dunn who, with a great mark close in, goaled to make the scores level. A late goal to Vallence and a couple of minor scores gave Carlton an eight point lead at the first change, after an even quarter.

Carlton’s defence stopped a promising South attack early and started the term in fine fashion, after Clarke played on and passed to Shea, whose kick bounced through an unguarded goal. Several more Carlton chances were missed through errors until Green kicked to Dunn, who marked and scored his second goal. Carlton had reverted to a long kicking game with good results, putting the South defence under pressure. South were battling away but Hale and Gill were excelling in defence. A nice burst of football resulted in two behinds for South, followed by their fourth goal from a soaring 50 yard punt. The game was still being played hard and Dunn was downed in a scuffle. His free kick assisted in Clarke kicking the Blues’ seventh goal, followed by a great goal to Butler after a long attack straight down the middle. He scored his second and Carlton’s ninth, after Davey and Crisp combined well. Carlton was now looking very strong and a behind to Wrout gave a handy lead. Huxtable stopped a late South attack to leave Carlton leading by 33 points at half time. Best for the half were Hale, Gill, Carney, Francis and Clarke.

Both sides made changes upon resumption. Huxtable (thigh) was replaced by Park and South had reorganised their team. A behind to Dunn was answered promptly by South, with a free kick bringing their fifth goal. The Bloods had lifted and now controlled the centre. Another thrust was saved by Park, and yet another brought a behind. Aerially South had improved and their new found dash had Carlton defenders under sustained pressure. Carney pushed Carlton forward for another behind to Dunn, before South hammered the forward line with a series of attacks, which brought only three behinds. Hale and Green eased the pressure, combining well to Dunn, who gained a free straight in front. His behind was a bad miss. Carlton mounted another attack, which was repulsed, and then Francis found Clarke for the Blues’ tenth goal. An instant response followed, some great play and a long drop kick bringing up South’s sixth goal. Carney profited from a defender’s mistake to score Carltons’ next goal. Kuhlken and Gill stopped three South thrusts, which seemed to mark an end to South’s improvement in play. Much of the pace and fire had gone out of the game and South’s players were visibly tiring. A chain of marks from Hale, Carney and Vallence provided Green with his first goal, to increase the lead. South’s defence was now very disorganised and McLean easily found Vallence, who goaled with a 50 yard punt to give the Blues a strong grip on the game, leading by 44 points as they changed ends for the last time.

The game was effectively over when Dunn and Wrout combined for Vallence to mark close in and goal. The same trio featured shortly after for a behind, before Kuhlken was infringed. His free kick found Dunn, who took a great mark in front. This time he kicked truly for the 15th goal. South was now being completely outplayed but were still trying; a behind not the result they wanted. Carlton was finishing very strongly, with Wrout finding Vallence. His kick fell short but Butler, from a pack, passed back to Vallence. He passed to Shea who kicked a great running goal. The attacks were now incessant. South’s defence stopped two thrusts, but Carlton was overwhelming, Dunn and Butler each bringing up their third goals. A late goal to South was little compensation as the bell rang with the Blues deserved victors by 70 points.

At the end of this round Carlton were in 1st spot on the ladder with a percentage of 218.6. 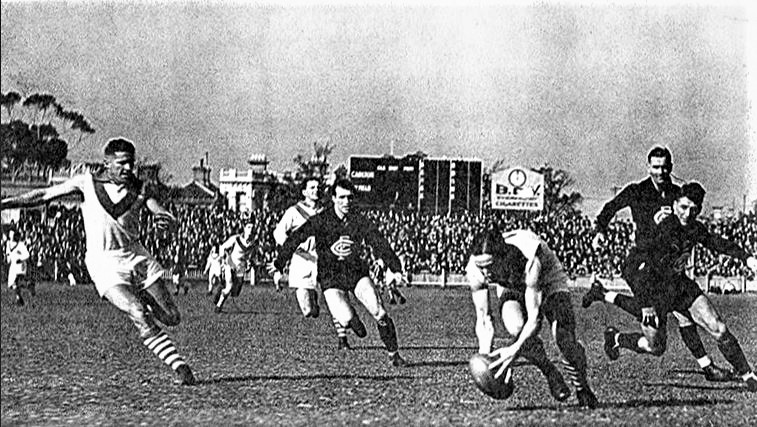 First quarter action on the Blues' forward line. Carlton players L - R: Keith Shea, Harry Vallence and Bert Butler
South players, Austin Robertson Snr, Bill Faul and Jack Austin with the ball.
Good shot of the old score board and quarter clock. The letters on the scoreboard to our right, correspond to letters on a page in the Football Record.
The end of quarter scores from the five other VFL games were displayed and updated.
The ornate white building on Garton Street, to the left of the scoreboard is still standing eighty years on.
(This image Blueseum. Original image Argus April 26 p6) 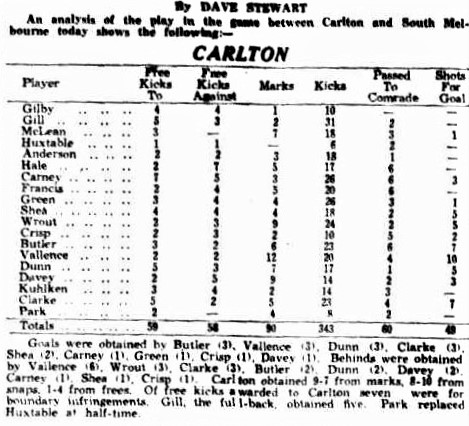