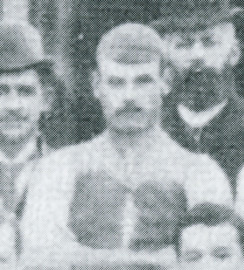 1890 Mentioned among other players who received trophies and awards at the Carlton Football Club general meeting held Friday 29th. March, at the Hibernian Hall.
(The Argus (page 5) Monday 31 March 1890)

Russ is pictured in the Carlton team photo taken in Sydney in 1890.
The History of The Carlton Football Club, Brian Hansen, p79)