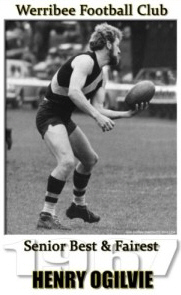 A lightly-framed, athletic defender from Ararat, Henry Ogilvie played two matches for Carlton in seasons 1962-63, wearing a different guernsey number in each of them. Remarkably, there was one year, three months and thirteen days between his debut game in 1962, and his second and last appearance in 1963.

On his arrival at Princes Park from Ararat in 1962, Ogilvie was allocated guernsey number 24, and started his career for his new club at centre half-back for Carlton’s Reserves side against Geelong. His team lost by just one point, but Ogilvie’s defensive work raised eyebrows and marked him for early promotion to the seniors.

That opportunity came in round 6, 1962 when Henry was handed one of the toughest assignments in football first up – playing as a key defender against Collingwood at Victoria Park. The Blues went into the match confident, but were second to the ball and beaten in the air after quarter time, on the way to a 16-point loss. Ogilvie was omitted for the following week, and shortly afterwards Carlton gave him permission to return to Ararat for the rest of the year.

Henry didn’t make it back to Princes Park until mid-season 1963, when he asked for a change of number to 37 and resumed playing seconds football. Eventually, he earned a recall to seniors in the last match of the season; against Footscray at Princes Park, where he played as a ruck-rover alongside John Nicholls and celebrated an emphatic win by 32 points. That was a satisfying way to finish a season, and his time in navy blue – because soon afterwards, Ogilvie was told that he was no longer required at Carlton.

Meanwhile, over in outer western Melbourne, the Werribee Football Club was preparing for its entry into the VFA in 1964. Henry found his way there, and over the next six seasons anchored their defence. Resolute and reliable, he was voted Best and Fairest for the Tigers in 1967 and 1969.

Ogilvie wore guernsey No. 42 whilst playing with Carlton's reserves team in 1963.