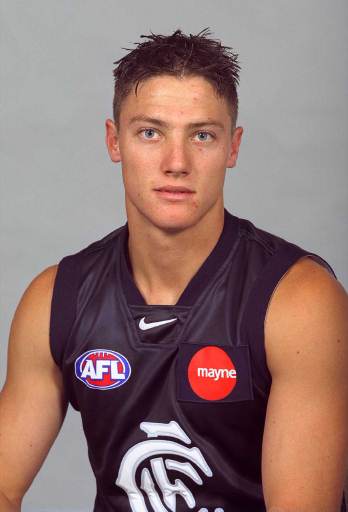 Originally from Swan Hill, Callan Beasy had shown promise as both a ruckman and key forward for the Bendigo Pioneers in the TAC Cup before he was Carlton’s fourth round selection at number 61 in the 2000 National Draft. By 2002, the Blues were hoping that he could develop into a back-up ruckman to Corey McKernan, but the fact that Callan was “only” 190 cm an era of 200 cm ruckmen – as well as some unfortunate injuries at precisely the wrong time - saw his AFL career last less than three years.

Beasy spent most of his first two seasons at Princes Park playing reserves football, until he became just the fifth Blue to carry guernsey number 42 into a senior match when he made his debut against St Kilda at Docklands inround 16, 2002. Although Carlton was demolished by 42 points, Beasy’s 6 marks and 12 effective hit-outs were an encouraging start, and he was retained for the next three matches. Meanwhile, the Blues were plunging headlong into crisis. Finalists just one year earlier, the team had been decimated by retirements and injury on the way to the club’s first-ever wooden spoon, and the sacking of coach Wayne Brittain.

In 2003, former North Melbourne Premiership coach Denis Pagan took over. Midway through the year, Carlton was shattered further when the AFL imposed huge fines and draft penalties on the club, after the Blues were found guilty of rorting salary cap rules. By September, Pagan’s team had finished second-last, and Beasy had played 10 matches over two years without experiencing the joy of victory.

The Blues churned their list ahead of 2004, recruiting experience from other clubs in lieu of the young talent denied by the previous season’s penalties. Beasy had to wait until round 12 for his next opportunity, but it was worth it - because Carlton knocked over Hawthorn on a Friday night at Docklands and he celebrated that first elusive win. Another victory over Richmond in round 13 was sweeter again, then Callan played what turned out to be the last senior game of his career against Sydney at Princes Park on the following Saturday afternoon.

The Blues went down swinging against the Swans, and Beasy was only sparingly used off the interchange bench. Afterwards however, Pagan told Callan that from then on, he would only be selected in the senior side in exceptional circumstances, and that didn’t happen. So, after playing out the remaining weeks of his contract with Carlton’s VFL affiliate club; the Northern Bullants, Beasy accepted an attractive offer from the Bendigo Bombers, where he spent two seasons from 2005 to 2006.

In 2007, Callan was lured home to Swan Hill as captain-coach, and brought immediate success. With another former Blue in Justin Davies at his feet, Beasy led the Swans to an upset Central Murray Football League Grand Final victory over Kerang. Four years later in 2011, he did it again when the same two teams met for another flag. The Swans had finished fourth after the home-and-away season, but with Beasy dominating the centre hit-outs and marking everything that came his way in the Grand Final, they led by eight goals at half-time, before eventually triumphing by 84 points.

Afterwards, Beasy was refreshingly candid when he reflected on his short AFL career.“I was probably a bit small to be a second-string ruckman," he said. "When I watch the footy on the TV now, I'm pretty adamant that I wouldn't be playing there anyway. It's so quick. That doesn't suit my style of game, so I'm pretty confident the time I spent there (at Carlton) was pretty much all the time I was capable of."