After a slow start, Carlton came alive in the second quarter, kicking seven goals whilst keeping St Kilda scoreless, and from then on maintained the lead, eventually winning by 19 points. The Saints fought it out gamely, but ultimately Carlton’s teamwork, system and steady heads were the decisive factors.

Four changes were made to the team, mainly to accommodate the return from injuries of Jim Francis, Frank Gill and George Dougherty. Jack Cashman was also included as 19th man. Those who missed out were Ansell Clarke, Gordon Mackie, Jim Park and Norm Le Brun.

St Kilda won the toss and kicked to the lake end goal. Within the first minute, Carlton had the first goal after Crisp passed to Vallence, who received a free and goaled from a tight angle. St Kilda replied quickly and then added another from a scrimmage in front. Fast, entertaining football was being played and Shea, ever quick and elusive, drove the ball forward from the centre. After some nice handball, Dougherty was able to kick an easy goal. Again St Kilda, having settled well, went forward and a nice pass brought up their third. The strong attacks continued and Gill twice took nice marks to stop the attacks, before a behind was scored by St Kilda and then another goal. Crisp kept the Blues in it when he kicked to Davey who marked brilliantly and goaled. Carlton was using their weight freely and attacking well, but the forward line was not yet working and chances were going missing. St Kilda was winning in the ruck and in attack and their fifth goal was kicked. Two Carlton attacks were repelled and converted into St Kilda forward thrusts, resulting in their sixth goal. Immediately after, another was scored from a kick off the ground. It was outstanding stuff from the Saints, who were almost unstoppable. Late in the term, Carlton rallied and Hale eluded a defender and goaled for Carlton from a long way out. At the first break, St Kilda was ahead by 20 points.

A different Carlton emerged after the break. Adopting a middle corridor system, Carlton’s fifth goal came when Mutimer passed to Dunn for goal five. St Kilda was still winning, particularly in the aerial duels. But Carlton was on the improve and gradually started to get on top. The St Kilda defence was under strain as four attacks resulted in four behinds, before it cracked after Shea, playing great footy, burst through a pack for a goal. St Kilda’s early brilliance had gone and Carlton was now dominating, with the backline impenetrable. Davey kicked his second following a nice mark to give the Blues the lead. Attacking around the grandstand wing, Carlton kicked to Vallence who goaled. Then Shea snapped another from the half forward line and within a minute Cooper had another. It had been a dramatic change; the Blues simply brilliant. Gill was dominant in defence, completely suppressing the St Kilda forwards and Shea and Cooper seemed to be everywhere. Mutimer was involved in a heavy clash and was very groggy afterwards. Carlton’s eleventh goal came after Davey passed to Denning who marked well and goaled. St Kilda finally attacked but two shots at goal were forced out on the full by the strong defence. The half time bell sounded on another, and St Kilda had been kept scoreless for the term. Carlton now led by 26 points and were applauded from the field at the break. Shea, Gill, Cooper and Davey had been particularly outstanding in a brilliant team effort.

Mutimer, concussed, did not reappear at the resumption and was replaced by Cashman. St Kilda scored an early goal but Crisp responded smartly. Play was now more even, although still very fast. Vigorous play had also come into the game, with some spite being displayed from both sides. A dashing St Kilda attack resulted in only a behind, before Cooper and Shea worked well with Denning for him to score his second. St Kilda attacked and Gill was penalised, resulting in the Saints’ ninth goal. St Kilda was getting plenty of the ball but their earlier polish had faded. Turner and Shea worked hard in the centre and forwarded to Davey who marked but could only manage a behind. Now playing much better, the Saints scored two goals, from a mark and a free kick respectively, to edge closer. Carlton steadied and using their system in the forward line well, Dunn had a long shot which just got home for the 14th goal. More good forward play enabled Denning to kick his third. But a late St Kilda goal made the difference 15 points at the last change. St Kilda had been the better side for the quarter and an interesting finale now loomed.

It was obvious from the start that both sides were determined to win. St Kilda looked dangerous but an attack scored only a behind. Francis, very good, started a great rebound attack and passed to Cashman on the wing. He kicked to Vallence for a great goal. Another St Kilda thrust was stopped by Gill. The ball went forward and Vallence again marked well 60 yards out. His booming kick gave Carlton their 17th goal and a handy lead. But St Kilda fought on strongly and determined play brought them two goals to keep things tight. Supporters from both sides were urging their sides on, cheering wildly. The game was still very fast and St Kilda was finishing strongly. One attack went wide and Anderson repelled another, but St Kilda pressed on and scored their 15th goal to make the difference only nine points. Now Carlton attacked and in a passage where no St Kilda player touched the ball, Gilby brought the ball around the wing and passed to Cooper, who after great play, passed to Davey for his third and Carlton’s 18th goal. St Kilda counter-attacked and Gill defended but the persistent Saints pressed forward and goaled to again make it nine points as time on was entered. St Kilda attacked again but De Luca was impinged and received a timely free. He kicked to Cooper who drove the ball forward to Crisp who kicked a great running goal. Immediately after the centre bounce, Cooper dashed from the centre and with a running drop kick sealed the game with Carlton’s 20th goal. In the end, Carlton’s cool heads and steady play had enabled them to hold off a determined challenger for a 19 point win.


At the end of this round Carlton were in 6th spot on the ladder with a percentage of 114.9. 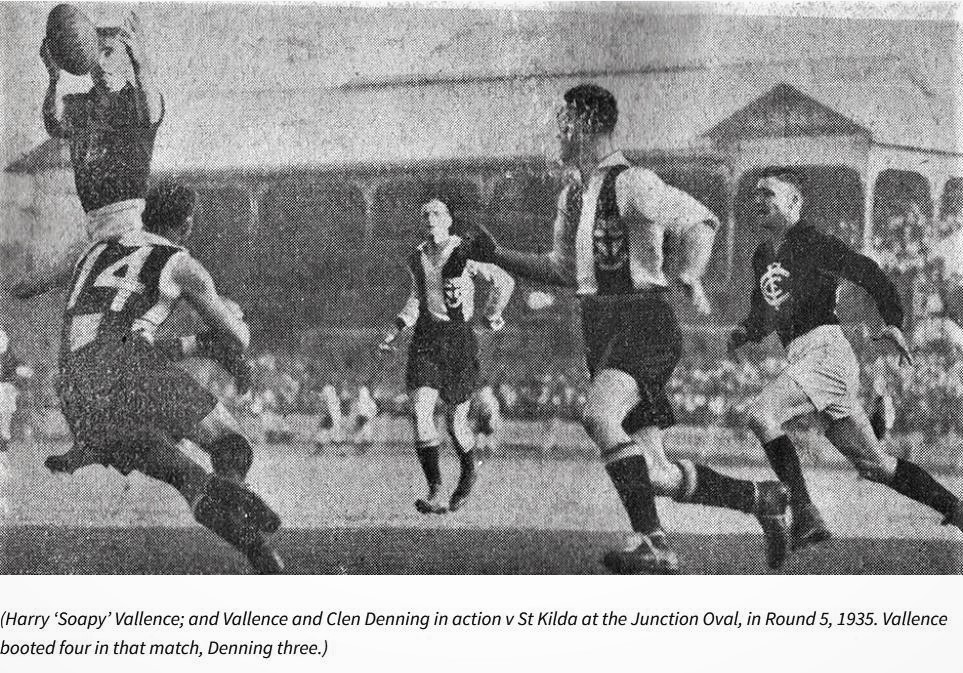