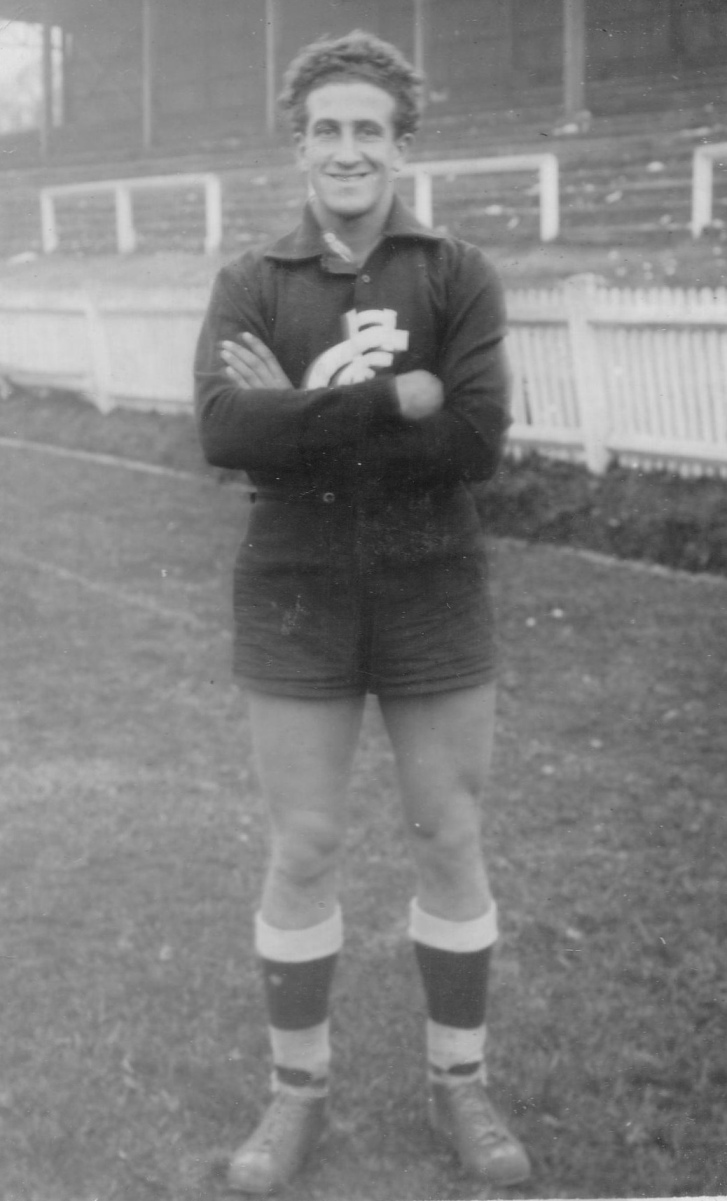 A clever player recruited by the Blues from South Bendigo, Ron Robertson played 30 senior matches in just over four full seasons at Princes Park between 1952 and 1956. His mop of dark hair and his exuberance made him a crowd favourite with Carlton fans, and the umpires couldn’t miss him, either. Despite relatively few games, he polled Brownlow Medal votes in all but one of his completed seasons with the Blues, and was a popular clubman throughout his stay.

Robertson began his senior career at Carlton as a half-forward flanker, wearing guernsey number 21. An unselfish type who brought those around him into the game, he managed six matches in his first season, and had played another four by round 17, 1953, when his coach Percy Bentley challenged him to play the centre (as a stand-in for the injured Doug Beasy) against Hawthorn at Princes Park. To Bentley’s delight, Robertson got plenty of the ball that afternoon, and distributed it well as Carlton won by 42 points. From then on, Ron alternated between the pivot and the flank. He finished the year on a high when he controlled the centre as Carlton’s Reserves picked up their fifth flag on Grand Final day 1953, with a comfortable 4-goal victory over Essendon.

Robertson’s most consistent season was 1954. He played 13 games, kicked three goals and picked up five Brownlow votes, but the Blues disappointed everyone involved by slipping to finish seventh on the ladder. Ron’s form too, tapered off, and he managed only another four senior matches in 1955.

He played at half-forward in Carlton’s first match of 1956, against Essendon at Windy Hill, but in the aftermath of a meek loss by 28 points, Carlton’s new coach Jim Francis questioned the viability of some of his men, and Robertson was one of three players omitted from the team for the following week.

A fortnight later, while playing for Carlton Reserves against St Kilda, Ron suffered a serious shoulder injury that curtailed his season, and eventually, ended his league career.

1956 April 30 Monday, The Argus reported;
"Carlton officials were dismayed to learn that Ron Robertson may have played his last game. One of the club's most brilliant players of last season, he played with the seconds last Saturday because he lacked match practice. In that game his collar-bone was fractured in two places, and the bones were splintered so badly that wiring might be necessary."