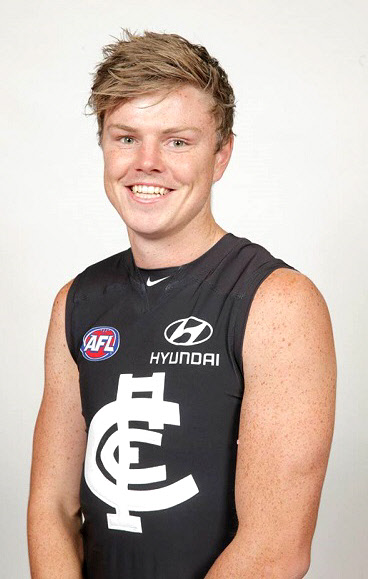 
A strongly-built, left-footed 187 cm midfielder who was described as “physical” and “ferocious” in pre-draft speculation, Nick Holman was Carlton’s third-round selection in the 2013 AFL National Draft at number 51. Hailing from Kyabram in Northern Victoria, he had been vice-captain of the Murray Bushrangers in the TAC Cup, and was voted Most Valuable Player for Victorian Country in the 2013 Under-18 National Championships.

A few days after arriving at Princes Park, Holman was allocated guernsey number 20 - previously worn with distinction by some of the club's greats including Alex Duncan, Sergio Silvagni, Wes Lofts, Geoff Southby and Fraser Brown. Nick served an almost season-long apprenticeship in the VFL with the Northern Blues, before his consistency was rewarded with selection for his first senior game against Port Adelaide at the Adelaide Oval, in the second-last game of the 2014 season.

Holman started the match on the field – no doubt expecting to be substituted off sometime in the second half - before Carlton captain Marc Murphy was concussed during the second quarter. That injury robbed Carlton of leadership, and left the Blues one man short on the bench as the Power seized control, and crushed their visitors by 103 points. Nick was nursed through the game with plenty of spells, gathering 8 possessions, 2 marks and four tackles.

Four players were omitted after that heavy defeat, and Holman was one of them. For much of the following twelve months he played consistently well in the VFL with the Northern Blues, and eventually earned a recall for Carlton’s crunch game against Gold Coast at Docklands in round 13, 2015. The Blues won by six goals on that Sunday afternoon to bring a glimmer of joy to the team’s dispirited supporter base - however for Holman, it was to be the one and only victory of his AFL career at Carlton.

Nick played another seven games in the latter part of the season, suffering defeat in all of them and averaging nine disposals per game. The bruised and battered Blues sat anchored to the bottom of the ladder all year, and in October the club took an axe to the player list. Holman was one of the casualties when he was told that his contract would not be renewed.

Holman went across the border to play for SANFL club Central Districts for the 2016 season, in his debut season he came 3rd in the best & fairest and was awarded a trophy for Most Courageous. He would line up for Centrals again for the 2017 season.