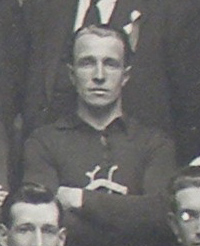 
Clarence ‘Clarrie’ Clowe made his debut for Carlton in the same match as Blues Legend Horrie Clover; against Richmond at Punt Road in May, 1920. And like Clover, Clowe’s VFL football career began after he had served his country in the Great War of 1914-18.

Clarrie was born in inner-suburban Richmond in January, 1893. By August 1914 - when Australia joined Great Britain in declaring war on Germany and her allies - he was employed as a flour miller, while playing consistently good football for VFA club Brunswick on weekends.

But like thousands of other Australians of all ages and from all walks of life, the outbreak of war brought irreversible changes to a previously settled existence. By April 1915, Number 478; Private Clowe of the 17th Battalion, was fighting on the slopes of Gallipoli. After the Allied withdrawal from the peninsula, he was sent to France, where his leadership ability was recognised with a quick promotion to Sergeant. In August 1917, he graduated from an Officer Training Unit, and spent the last year of the war in a variety of training roles with ANZAC troops.

When the Armistice was signed on November 11, 1918, many men who returned safely to Australia looked forward to a different kind of battle on the football field. Among them was Clarrie Clowe, who joined Carlton and pulled on guernsey number 14 to play his debut match (on a half-back flank) against the Tigers in round 6 of 1920.

The Blues finished third on the ladder that year, and Clarrie played nine games – although he wasn’t included in either of the Blues’ finals teams. Collingwood ended Carlton’s year with four-goal victory in the Preliminary Final, only to fall to Richmond in the Grand Final.

Season 1921 saw a further influx of returned servicemen to all VFL clubs, so places in the senior teams became increasingly harder to retain - especially for lightly-built players like Clowe. Squeezed out of half-back by taller, heavier and equally skilful types, Clarrie was given three games in the back pocket, but didn’t make enough of an impression to hold on to his place after round 13.

At the end of that year, Clarrie bowed to the inevitable and crossed to Essendon, where he managed to play five more matches, and kick his only career goal. Afterwards he lived in Moonee Ponds for many years, and passed away at the age of 87 on October 10, 1980.