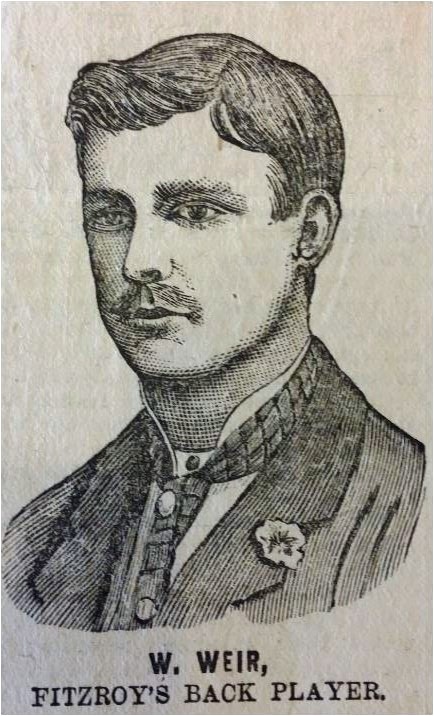 William ‘Winkie’ Weir was a foundation Blue - Carlton’s first VFL full-back - who wrote his name into club history on Saturday, May 8, 1897 when he anchored Carlton's defence against Fitzroy in the first-ever round of matches for the Victorian Football League Premiership. As has been well-documented, the Maroons were too big, too experienced and too good for Carlton on that historic occasion, setting a trend that would stretch over almost a decade.

Weir was actually born in North Fitzroy in 1874. As a youngster he played for Fitzroy Juniors and later, the powerful Maroons in the VFA. Eventually, his talent led him into VFL football with Carlton – where the first and last of his 16 games were played against - yes, Fitzroy.

After that landmark debut game against his former team, ‘Winkie’ was shifted across to the pocket, while a succession of others were tried in his place. Jim Lyons’ name appears most often at full-back in club records of that first difficult year, with Weir regularly beside him. Carlton ended 1897 second-last on the ladder, having beaten only wooden-spooners St Kilda (twice) in a torrid introduction to the new competition.

'Winkie' Weir played on into 1898, filling a variety of defensive roles in his seven matches. On a half-back flank mid-season, he returned to a back pocket for his last game, and ended his VFL career where it started – on the then-picturesque oval at Brunswick St., in front of another large crowd. Sadly, it was not a happy occasion for Carlton’s players or supporters. The Blues kicked just 1 goal, 1 behind for the entire match, and were thrashed by 83 points. This was, (and is) Carlton’s lowest-ever score against Fitzroy.

After his playing days at Carlton were over, 'Winkie' worked as a chemist in Williamstown. In 1900, he volunteered for active service in the Boer War, and served as a corporal with the 5th Victorian Mounted Rifles. In 1903 he returned home with the Queen's South Africa medal and 3 campaign clasps for service in the Cape Colony (or Cape of Good Hope), the Orange Free State and Transvaal.

1896 May 30
Possible Carlton debut; Weir played in the game against Collingwood at the University Cricket Ground.
He would have been aged 21 years, 280 days.

1896 June 20
Weir mentioned in the game against Geelong at the MCG.

1896 July 04
Weir mentioned in the game against Fitzroy at the MCG.

1896 August 01
Weir mentioned in the game against Williamstown at the University Ground.
The Carlton Gazette said; "Wink" Weir was the equal to any backman on the ground and put in sterling defensive work."

He may have played in all 18 Carlton games that year, but there is a lack of information in regard to team squads and match reports - possibly due to Carlton's poor on-field performances in recent years. Or to the the severe economic depression Australia was experiencing, and the fact that newspapers were trying to cut costs.
With the 2016 release of Mark Pennings' book "Origins of Australian Football" Vol 4, W. Weir played 17 games in 1896.