After opening with successive losses a win was desperately needed and Soapy's 6th gave the Blues a last-minute triumph.

Carlton opened with the first two goals of the match, through Vallence and Wiiliams, before Richmond steadied to kick the next three. Carlton, playing a faster game, scored goals late in the quarter to Crisp and Vallence to lead by five points at the first change. Both sides found scoring difficult in a fierce opening ten minutes of the second term until Richmond goaled. Another followed before Carlton responded with goals to Vallence and Davey, after a great mark, to give the Blues a five point lead at the half time interval.

Richmond edged ahead in the third as they gradually got on top. However, Carlton's defence was playing well and caused Richmond to kick long at goal, which resulted in many chances going astray. The Tigers kicked 3-7 for the quarter to lead by seven points going into the last quarter. Carlton's goals in this term came from Vallence and Crisp.

Carlton opened the last term with a great burst of goals. Mackie, after a fine mark, kicked truly and another to Arthur soon after gave Carlton the lead. The Blues were now playing a faster and harder games and were winning in the air. As expected, Richmond rallied and goaled, but continued Carlton pressure saw them kick eight behinds in a row until they goaled again to lead by 15 points late in the game. Carlton went forward and Crowe, after a free, passed to Vallence, who goaled to reduce the deficit to nine points. Now it was Carlton's turn to kick poorly and four behinds in a row made the difference only five points. With only minutes remaining, Arthur, after a heavy knock passed the ball to Egan, who then passed to Vallence to kick his sixth goal and give Carlton a one point lead. Carlton turned back three Richmond attacks in the last minutes to keep the one point lead as the siren blew.

At the end of this round Carlton were in 9th spot on the ladder with a percentage of 81.5 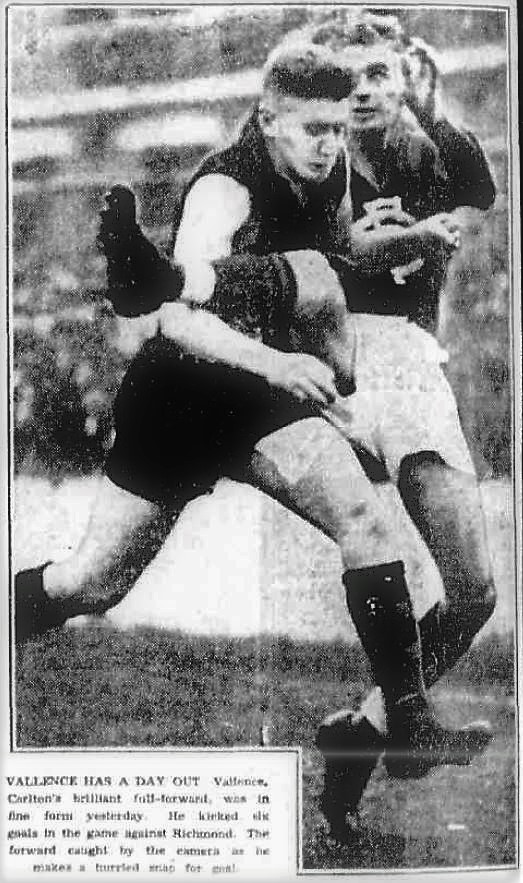 Debut (Carlton): Charlie Street
50 Games: Maurie Johnson
Score Records: This was the first of 11 consecutive wins for Carlton, one of the best winning streaks in our history

1982 - Kooka: Herald Shield players who have made the big time.